I’m always finding out new bits of information on materials and what can be done with them, but usually I have a problem deciding where to put these notes so that I can rely on easily finding them again! So, needing a handy alphabetical notebook, I’ve turned the former vocabularly into a lexicon .. which basically means the same thing but sounds ‘BIGGER’!

Whereas the vocabulary confined itself mainly to explaining the meaning of terms the lexicon provides more, and for me it’s a handy place to update essential knowledge on a variety of things without involving the ‘song and dance’ of a structured post. In my experience so far, having ‘knowledge of making’ arranged according to principle materials, and those in alphabetical order, makes things much easier to find .. at least it does for me! Entries will usually start with the basic definition, but then include anything I feel it is important to know in practice. Since I will, no doubt, have to constantly refer to it myself it won’t be left unattended so it’s guaranteed to grow!

Here, for example, is an entry I’ve just updated on Milliput which represents what I hope the whole of the lexicon will eventually become:

Milliput is a 2-part, very hard-setting epoxy modelling putty, available in two fineness grades and a few different colours. It is most suitable for small, delicate work. ‘Standard’ Milliput is a light yellow/grey colour when mixed while the extra-fine grade is white. When equal amounts of both parts are thoroughly blended together (until the colour is uniform) the putty begins to harden. It remains easy to model for around 40mins, then slowly hardens (but see below). It will stick annoyingly to fingers, but can be smoothed or even thinned with water. Vaseline on the fingers is effective in helping fine smoothing (methylated spirits can also be used).  It will stick well to most surfaces in it’s soft state and even serves well as a gap-filling ‘cement’ especially if it’s used straight after blending when it’s still sticky. It is often used in the restoration of antiques and art objects because of it’s high adherence and strength when cured. When hard (after 3-4 hours) it is very durable but can be easily sanded and tooled (i.e. sawn, drilled), even carved with a scalpel. There is no noticeable shrinkage. According to the manufacturer it has a shelf life of c. 2yrs if stored cool, dry, sealed in polythene bags provided.. but see notes below. Obtainable most good art or hobby shops, Tiranti, 4D Price (2013) c.£2.28-£5.06 (Tiranti) per 113g packet dependant on type (ranging from standard to fine grade and colours e.g. terracotta, black).

At the time of writing (7/2013) I have not found any other epoxy putty to compare with it.. Apparently the setting time can be speeded to just a few minutes by applying heat (Tiranti website). Best method of mixing; portion equal amounts and press these together, then roll this into a long ‘string’, gather up and twist together then roll long string again .. repeat etc. After 3-4 hrs hardening, it needs same amount of time to fully cure. Heat resistant up to 130C. Can be coloured by blending in powder pigment (or even oil paint, or spirit-based colourants) while mixing. Different Milliput versions are intermixable but also resin or hardener parts between them (as long as one knows which is which) are also interchangeable. The ‘hardener’ is usually the darker of the two and will develop a resinous crust over time. If used as a press-casting material, ‘talc or a light oil can be used as a releasing agent according to the Milliput website. Another tip from this website is that, if you have to interrupt work during modelling, it will keep in its uncured state for up to 36hrs if put in the freezer.

How to model with Milliput Use should be made of the fact that Milliput will change in consistency as it cures i.e. for the first 30mins rough build-up when at it’s softest, after which fine detail especially imprinting and smoothing are easier once its getting firm. Carving can be done after c. 2-3 hrs when almost set, then sanding/filing after 3-4hrs.

Accelerating hardening 7/2013 ‘Tips’ found (not yet verified) include: baking in oven (max 50C) for 30mins. Since cured Milliput is heat-resistant up to 130C successive adding/baking is possible.

How long will Milliput remain usable? I recently made a test of some Milliput I’ve had for at least 10 years. In fact, I was going to throw it away because it had become rock-hard and the darker ‘hardener’ part (as I assume it to be) had developed a tough, resinous skin. I was surprised though that after managing to chop off two equal pieces and starting to squeeze them between the fingers they became softer and eventually soft enough to start mixing together. For this first test I left the tough skin on, believing that it might still blend, but it remained as small hard granules.

Above, my usual method of mixing Milliput is first to combine the two parts roughly and then start rolling the mass into a long thin string, which I then divide, twist the strands together and then repeat a few times until the colour is even. The hard fragments of skin remained so I tried chopping and pressing the mixture on a tile in case that got rid of them.

It didn’t much, so I stopped blending (it had taken altogether about 20 minutes) and left the piece to harden, below. The consistency was not good (compared to fresh Milliput), ok perhaps for rough work but rather fibrous and prone to fissuring when stretched.

I did another test but this time peeling off the crust from the darker Milliput stick, just using what remained. This mixed very smoothly, a little harder than new Milliput but still a good, smooth consistency, below. I needed 10 minutes to mix it thoroughly. 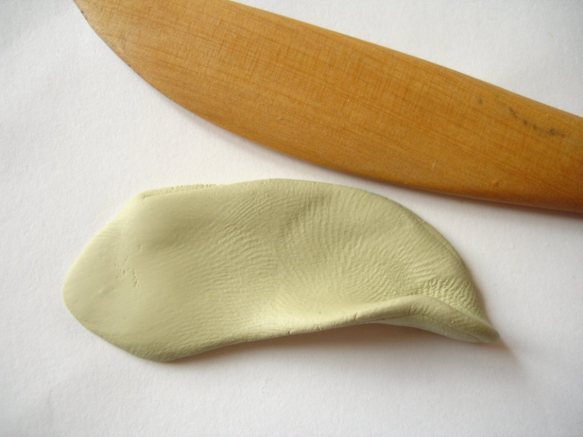 I’ve never properly timed the setting of Milliput up to now and I’m glad I did with these tests because I’ve generally been telling people that they have about an hour to model with it. In fact it’s much longer .. if one can make use of the changes to model differently (and later carve) as it toughens. I made a further control test using new Milliput in addition to the two above.

10 year old Milliput with ‘skin’ included After 1 hour firmer but still could be kneeded and modelled; less sticky, and ideal in this state for impressing with tools; little rubbery ‘springback’ as yet i.e. marks made with tools stay as made. After 2 hours no longer easily kneeded or modelled, but still very flexible; still easily cut-able with a knife; still good for impressing though slight ‘springback’ i.e. marks made with tools fill in a little; easier to smooth the surface without distorting the form.

10 year old Milliput with ‘skin’ discarded After 1 hour same as above After 2 hours same as above, though a little firmer and impressions spring back more

Both After 3 hours still cut-able with a knife; still bendable, but no longer mouldable; can be squeezed but springs back like rubber and impressions do not hold; very good for carving. After 4.5 hours like tire rubber; ideal state for carving

7/2013 the nationwide £shop chain ’99p Stores’ now stock a form of mixable epoxy putty from the ‘Do It Right’ brand. This is packaged in small, pre-portioned pellets which one just has to blend together. Each pellet is c. 4g and there are 8 to a pack so this doesn’t work out any cheaper than standard Milliput.. just could be easier to get hold of. It has different properties though, as one can guess from the smell which is more like regular epoxy glue than Milliput. For a start it’s much softer and stickier when first mixed (so much so that using one’s fingers becomes rather difficult) and there’s a graininess that doesn’t really disappear. Part of the reason for this is that, although it may be helpful that the two parts are already dosed, with one wrapped around the other, where they touch a hard layer develops because this has already started to set!   The only other possible advantage (depending on what you use it for) is that it sets up much quicker than Milliput; in my test it was a bit too firm to model with after 15 minutes and had reached almost complete hardness after 2 hours. When fully cured it was also very strong. It may be ideal as a gap-filling glue or repair medium, but not so good for modelling.

The mixed test piece above was gently flattened and pulled out in the same way as the Milliput tests but the graininess and fissuring are apparent here.

4 thoughts on “Lexicon of materials and methods”