Access to the stone steps down to the foreshore is on the Thames Path, on the upstream side of Surrey Docks Farm, so if you’re coming from downstream and the farm gates are closed you will have to walk around it.

There’s some shingle higher up on the beach around the steps, but not much. In the main it’s mud of different kinds .. and a great expanse of that especially upstream to the left at low tide .. which may delight the mudlarks but could dismay the beachcombers without boots!

The stretch that can be accessed from these stairs at low tide is quite far-reaching in both directions. Downstream it extends past Whiting Stairs until cut off by an old inlet to Greenland Dock, and upstream it extends to Pageant Stairs or even further to Globe Stairs if the tide levels are favourable. The ‘mud flats’ are also quite broad (from wall to water) especially in the downstream direction and this is a favourite spot for mudlarks .. once I went there at a popular time and it felt like a football pitch while the game is on!

The large foundation structure in the above photo may be the remains of one of the ‘cranes’ indicated on the map below.

I’ve experienced some of the thickest ‘tidal mud’ covering here, but other than that one just needs to keep an eye on the exits when the tide has started to come in. The beaches are quite broad in this stretch so there’s less likelihood of being caught out.

The OS Map from the late 1860’s indicates an ‘Acorn Wharf’ where the top part of the beach is now and Surrey Docks Farm occupies the blank area to the left. In terms of local history what’s left to say after noting the same for so many Thames locations? ..

.. docks, more docks, and associated trades; shipbuilding, bargebuilding, ship repair or breaking; community of merchants, seafarers and those in related trades, and those who live off them ..

According to one mudlark I spoke to he’d found the longest pipes in his collection here .. but added that was a while ago and there’s not as much now as there used to be. I’ve heard that quite often! I’ve only been here a few times but I found a few very well preserved and quite long pipes of the plain 18th century kind .. I just haven’t got around to photographing them yet.

I noticed a good variety of ‘potsherds’ including plain earthenware, stoneware, fragments of salt glazed, Staffordshire combed slipware, and 18th century Delftware .. along with the usually thinner, patterned Victorian fragments. In a couple of places along this stretch there are pottery dumps like this one below

There’s also a lot of the usual evidence of ship and barge breaking .. 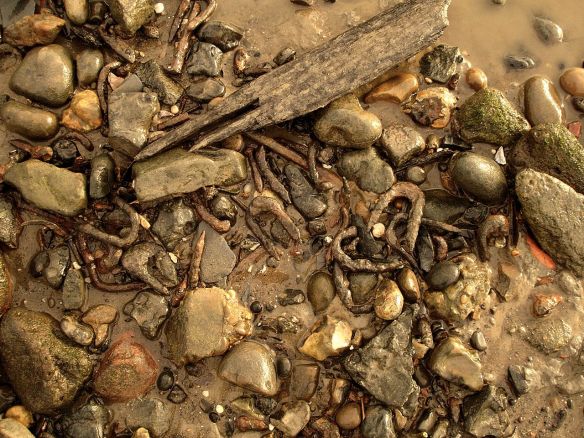 Higher up on the beach where the shingle usually collects the landscape is dominated by brick fragments of all colours, to the exclusion of much else all the way along this stretch.

The following sections of the 1860s map are to be read ‘jumping over each other’ in succession as one progresses upstream towards Horn stairs .. you’ll get the idea because certain markers are repeated.

Once again, there’s no problem finding the stairs if you’re on the Thames Path approaching it going downstream but if you’re coming from the other direction the path diverts around a substantial Hilton complex .. the diversion is fairly clearly signposted though. 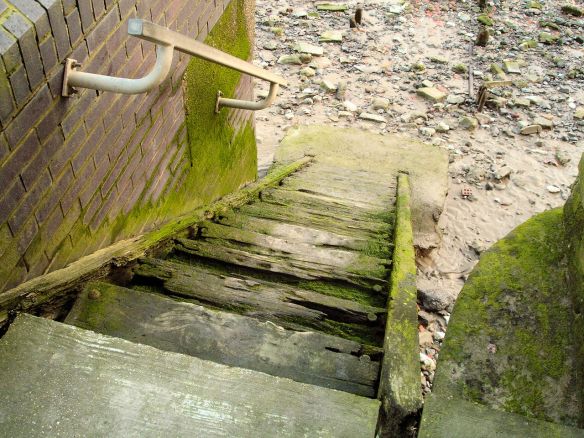 The stairs themselves are unusual in that the bottom part is ancient-looking wood but they seem pretty solid.

At the bottom is a truly ancient looking causeway which already looks different from just a few years ago, and sadly there will be less of it a few year’s hence. But there’s no arguing about it with the Thames .. continual change is an unchanging part of the experience. 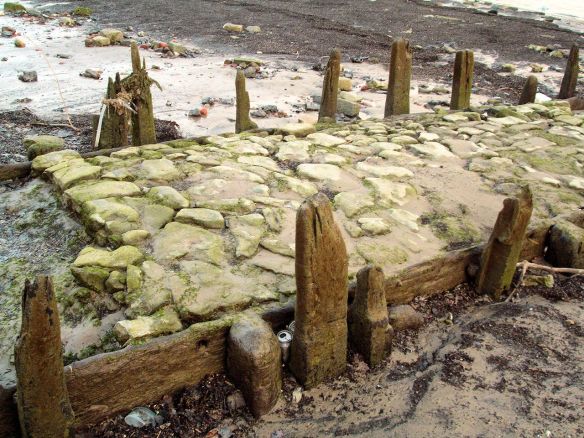 Below ‘Cuckold’s Point’ looking upstream and then down 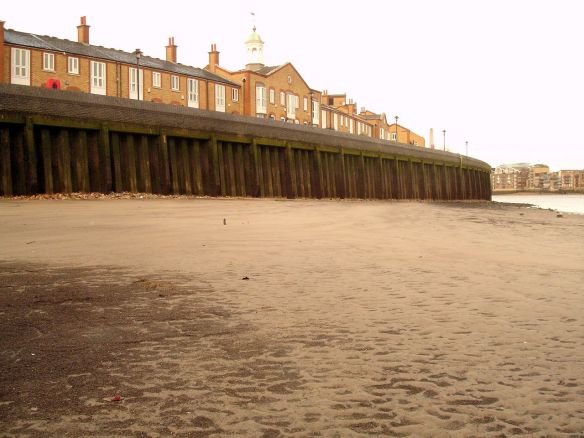 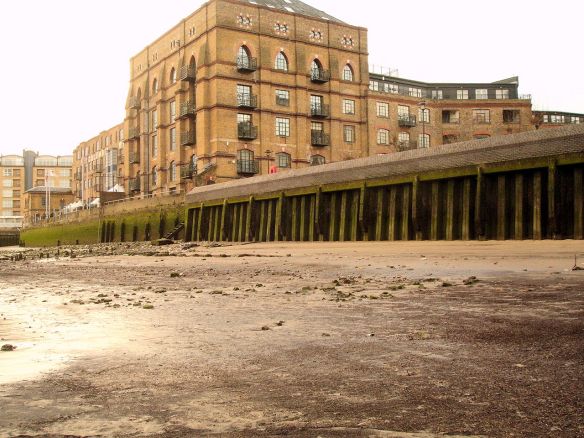 Really no unforeseen ones worth noting unless you’re allergic to sand.

Horn Stairs marks the position of ‘Cuckold’s Point’ as it’s been known for centuries, the ‘point’ being the centre of the river’s bend. The reason why it’s ‘cuckold’s’ ( the same reason why the stairs are called ‘Horn’ ) is because for centuries this marked the beginning of the Horn Fair, a festive and very secular procession all the way past Greenwich to Charlton, held every year on October 18th. There are various stories of ‘cuckolding’ associated with it.

A Morning, with a View of Cuckold’s Point Samuel Scott 1750s (Tate)

Given that it used to be a ferry point across the river one would expect more here but the absence of mud (which perhaps doesn’t accumulate because of its exposed position) may also explain that. I had been looking forward to coming here also partly because of the name and it’s commemoration above .. but perhaps I should have known from the painting that it could be rather flat and bleak! There may be things to be found in the debris surrounding the old causeway .. but I didn’t when I was there. The place is more experiential than material .. it’s worth a visit for the feeling of ‘openness’!

One doesn’t have to walk far upstream to reach Pageant Stairs .. a trudge over bricks and old building stones. After that there’s no going further, even at the lowest tide I’m guessing

None noted so far except a walk back downstream!