Have a look at this drawing. This is ‘technically speaking’ a technical drawing .. but a naked one! It describes an exact three-dimensional form in just three views, just using lines to represent the visible edges.

But, just knowing that .. how can we read this drawing? What does it tell us about the object or structure it represents?

Technical drawing relies on a number of agreed assumptions: .. that all views are of the same object and only that object, but from different viewpoints and that all views are the same scale; that all visible edges are shown by a line and that we assume those edges progress away from us to form faces which are normally flat and at right-angles unless otherwise indicated elsewhere on the drawing; that there is no perspective used in the drawing. In other words our lines of ‘sight’ do not converge with distance but are parallel and perpendicular (at right-angles to) the face of the object shown; that wherever possible these views are ‘lined up’ with each other so that we can easily relate one to another, moving three-dimensionally in space, as it were, around the object and that most often the ground-plan view is placed at the bottom because it is the ‘basis’ from which all else is elevated.

If you had not read  the above and had never seen a technical drawing before you wouldn’t be able to read much with certainty from these shapes. But when one takes on these agreed assumptions .. known as conventions in technical drawing .. one can start to read it, deducing various things, albeit not with complete certainty yet.

For example, if the bottom view is the ground-plan view then the shape above it is most likely to be the front face because it’s the same length and it explains that the line we see dividing the bottom form is because the block extends upwards at that point. Because the shape to the right of the front view is lined up on the same ‘level’ we can assume we’ve turned on a horizontal axis so it’s a side view and it looks the right width if we compare this to what we see on the ground-plan. We can be certain that we are looking at the left-hand side because this is the only view that fits with the other information we’ve got. We’ve had to do a small amount of mental/spatial visualization to get this! As I’ve said, this drawing has been stripped of all the additions which are supposed to make it easier to read than a visual puzzle .. but nevertheless a certain amount of mental visualization is always needed. 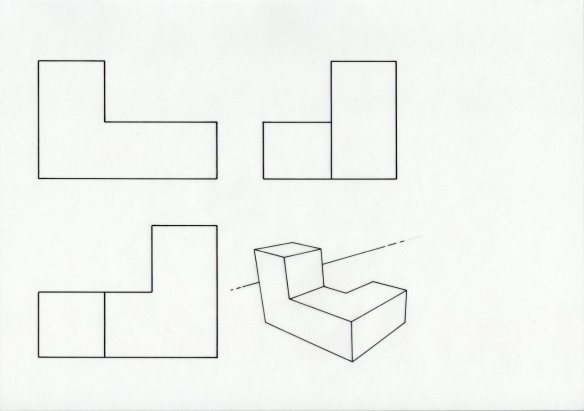 Of course it all becomes easier to interpret if this is added .. a simple 3D line drawing using perspective! Now we can see clearly that we were right about the ground-plan view and the front, although we still have to use our power of visualization a little for the side. Despite being undeniably helpful, perspectival views haven’t been common in technical drawings up to now. This is probably because they take too long to do and are somewhat outside the skills or motivation range of most draughtsmen. It may also come from the purist notion that technical drawings shouldn’t need them, or that it even goes against the rulebook of using a language devoted to strict parallel projection. But nowadays it’s so easy to create perspective views in programmes such as SketchUp and either print or trace them, with or without shading, onto the drawing if there is an available space to put them. In this age, when there are so many means of communication, involving so many different ‘languages’ .. people are generally losing the ability to master even one well enough! So I’d recommend that you include these visual supports if you can!

The first version shown above satisfies many of the fundamental strictures of a proper technical drawing .. but of course not all. The most important missing are scale and measurement. Here below is the same drawing .. now almost fully ‘clothed’. Now it is clear what size we are dealing with .. the scale used for the drawing is given in the block of information commonly termed the title block and in any case the measurements (in millimetres) are also displayed. We could get all the measurements if we scaled up the drawing 10 times (the scale given is 1:10) but the inclusion of most (often not completely all) of the measurements is a recognised courtesy, so that the reader of the drawing doesn’t have to use the scale ruler for everything. It’s also possible that a drawing can distort during copying, whereas written measurements remain exact. Also, if the scale is there but no measurements given against any lines, how can you be certain that the drawing has been copied at 100%? 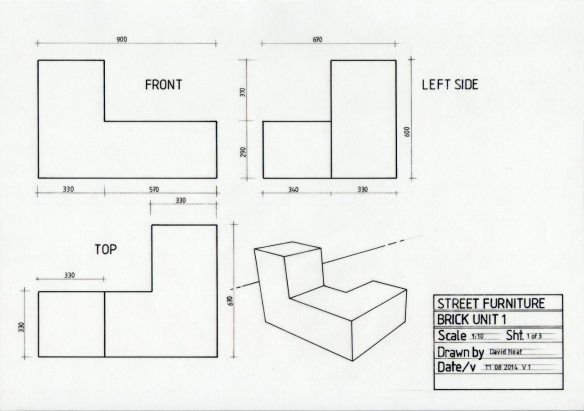 These measurements are written in millimetres here, the most common practice for theatre in the UK and increasingly now .. thank goodness! .. in film and television. Notice how the longer, overall measurements are kept a little separate to make them easier to find and notice how heights and lengths are not needlessly repeated. Notice how these ‘clothes’ sit .. comfortably, with some breathing space. The structure itself is still very clear, because the measurement lines are thinner and spaced a little away from the edge of it. Because of this the beginning and end of each measurement line needs to be emphasized, hence the slight crosses. Notice also that the measurements are written to be read in just two directions, from bottom-top and left-right .. rather than circling like ants!

We now also have important written information .. the views are labelled to remove any remaining doubt and the title block has, as the name suggests, a title! The sheet is identified as ‘1 of 3’ and the version dated. All this, and sometimes more, is necessary to keep track of what might become a large batch of drawings within a single project.

But what is represented here is a very simple form which assumes no significant surface detail. I intended this playground ‘street furniture’ unit to be made of brick and chose the dimensions to conform to standard brick measurements, but I wanted a specific pattern. When the designer intends an appearance which directly affects the construction of it, this information must also be on the drawing. I also had to draw all visible sides first in scale just to work out how standard bricks could be laid in the pattern I wanted. This illustrates yet another fundamental .. that measured drawing is not just a final rendition after all design decisions have been made, but an important tool for working things out even in the early stages. 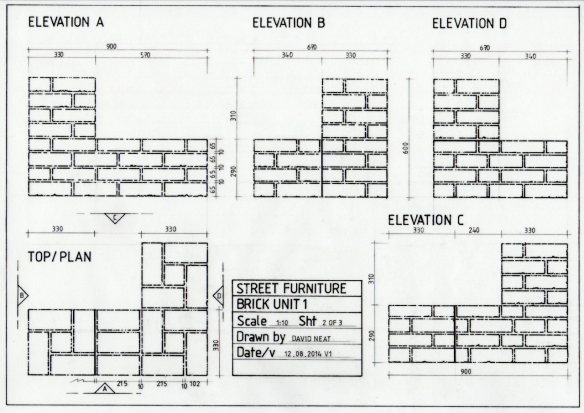 The version above is now starting to look more typical of the densely packed set drawings you may have seen if you’ve had a chance to look at any from theatre, film or television. The perspective view has had to go unfortunately, to make room for the two remaining elevations as they’re now called, and to avoid any possible confusion arising from ‘back’ or ‘front’, ‘left’ and ‘right’, these are given letters which correspond with clear arrows of viewpoint arranged around the ground-plan. This is a more sensible method, because these pointers not only indicate the direction of view but also where the point or rather the plane of view is in terms of distance. The identification and linking of parts of the drawing by means of letters and symbols is known as coding.

Notice also how the measurement lines are now arranged .. overall measurement on the outside with more detailed divisions closer to the object. The line bordering the sheet may seem just a presentation touch .. but it actually has a more serious purpose. When the drawing is copied it indicates that the whole drawing has been copied, i.e. with nothing missing at the edges.

So, in conclusion to this first part, the ‘principles’ I referred to in the title are firstly those general and often unspoken assumptions I listed at the beginning, plus the following which I’ve tried to illustrate in this article, namely:

.. that technical drawings need four qualities above all else: accuracy (both drawn and written measurements should be correct, precise and in the right place); clarity (both meaning and appearance should be clear and readable); consistency (the ‘language’ used should be used in the same way throughout); economy (the drawing should be uncluttered by needless repetition)

.. that the layout, the arrangement of views on the sheet, is fundamental to the understanding or ‘reading’ of what they mean

.. that technical drawing primarily involves common sense in the way three-dimensional structures are represented in line but that common sense alone is not enough to either create or to read them. The special language of conventions has been developed to assist and it is expected to be used. This reduces the amount of mental visualization we need to employ when trying to understand three-dimensional space from a two-dimensional drawing, but it will always involve some!

.. that there should be no room for misinterpretation, no ‘reading between the lines’. The reader of the drawing should not have to make guesses outside of the agreed ‘assumptions’ or conventions referred to.

.. that the object views themselves should be treated a lot like VIPs or ‘untouchables’ .. clearly defined, with everything else at a respectful distance

.. that technical drawing is not just the ‘final account’ where all the sums are checked but an important tool in developing the design

.. that at the very least the primary measurements should always be written even if the scale is clear and that this is not only a courtesy but also allows the reader to check the accuracy of the copy

.. that the drawing should include all important information that directly concerns the structural making of the object or anything in ‘relief’ but doesn’t usually include details of painted design or colour. It is also generally agreed that the designer’s responsibility is to convey what is seen but not necessarily how it will be made

So far though I’ve illustrated using a simple, solid object which doesn’t bear much resemblance to a theatre or film set .. we’ve dealt with a simple block from ‘without’ rather than a box from within. When something like a hollow box is the object of the drawing there are some major differences .. the layout usually has to be different, the ground-plan contains much more information, and there is often the need for sections in addition to elevations, a device we haven’t considered yet. These and other things will be featured in Part 2.