Standard silicone rubbers, such as the ones I’ve featured on this site, should on no account be used to make moulds for edibles .. whether this involves baking or not! There are chemical components in these that will always transfer to the materials cast in them .. however cured, seasoned, scrubbed or soaked the moulds might be.

For food purposes there are special food-safe or ‘food grade’ silicone rubbers available. These are always more expensive than the regular kind .. usually around £30-40 per kilo as opposed to the standard c. £25 average. There is less choice of types and they are not as easy to get hold of. Tiranti in London has only one food-safe silicone on its shelves.. the MM730. Like most food-safe silicones this is an addition cure rubber, but whereas most addition cure silicones are mixed 1:1 in their two parts MM730 is mixed in the ratio 10:1 silicone to catalyst (a ratio one expects with condensation cure silicones). Addition cure silicones are markedly more susceptible to contamination, resulting in curing problems, and one of a long list of inhibitors is.. apparently, garlic, although I’m not certain of the truth of this! But I would suggest that the making and curing of food-safe silicone moulds should not be carried out in a working kitchen .. for the sake of the silicone rather than the kitchen!

MM730 has a Shore A when cured of 30, so fairly average, as is its viscosity when mixed which is 15,000 mPas. Common to most silicones it will withstand up to 200 degrees C once fully cured. When mixed it will stay workable for an hour (‘pot life’), and it needs 4hrs at room temperature before it can be demoulded then another 20hrs to fully cure. Food grade silicones should not be used until fully cured! Full curing can be greatly accelerated to just 30mins by heating at 100 degrees C. Further technical information for this silicone including MSDS documents can be found here:

As far as I’ve been able to find out, there is no thickening additive for this silicone, so it can’t be converted to a non-slump paste for spreading. The only solution, for making shell moulds, would be to first apply a detail coat over the prototype form (preferably at least 2mm thick), wait patiently for this to firm up during which time some re-spreading may be necessary, then apply a second coat with a layer of muslin pressed in. This should contain any further movement. The first coat must be allowed to become pretty firm, otherwise there’s the danger of pulling it away from the prototype surface when applying the second coat! The muslin should be 100% natural i.e. no synthetics, and it should be hot-washed and dried first to remove any dressing agents.

What I’m not so certain about yet is the type of prototype that is safe to use .. or whether just a good sealing with Vaseline will automatically prevent contaminants transferring to the silicone. A greased plaster prototype would undoubtedly be safe! .. and I’d imagine that Vaseline or glycerine would adequately shield a wooden form, but I’m not sure about what precautions should be taken when the prototype is resin or polymer clay for example.

4D modelshop also stocks just one ‘food grade’ silicone rubber, Bluesil 3428, also in 1.1kg kits (though here 5.5kg kits can be ordered). It is also an addition cure rubber, mixed in the ratio 10:1. In fact most of its properties read much the same as MM730 above .. Shore A 28, viscosity around the same, pot life 60mins .. except that the demould time is given as 16hrs and, as far as I can tell from the technical info, the mixed colour is white whereas MM730 is beige. There is also no clear indication of how much heat it can withstand, which is remiss, but I think it’s safe to assume that it can take up to 200 degrees C. For the technical and safety data sheets go to:

There’s one further difference to mention, and it’s something that’s always worth considering when choosing silicones .. the SG i.e. ‘specific gravity’, being the weight in grams of 1 cubic centimetre or ‘ml’. MM730 has an SG of 1.25 whereas Bluesil 3428 is lighter, with an SG of 1.1. Since silicones are normally sold in kilograms this means that there will be more Bluesil 3428 in volume for the price! The current price at 4D (2017) is £33.00 per 1.1kg inc. VAT, making it all-in-all considerably more economical than Tiranti’s.

I’ve heard it said many times that the ‘big issue’ with silicones of this type is the retention of air-bubbles during mixing, which can easily be transferred to the surface of the prototype, and that therefore the mixed silicone should be properly degassed before it is applied. This is beyond the means of most! The method described above, of applying a very thin ‘detail coat’ first .. perhaps initially an extra-thin one, waiting for a while, and then quickly applying more .. should eliminate these bubbles of trapped air.

I recently had an enquiry from the Head Pastry Chef for a leading London restaurant. He needed some advice on making food-safe silicone versions of copper cake moulds such as these. 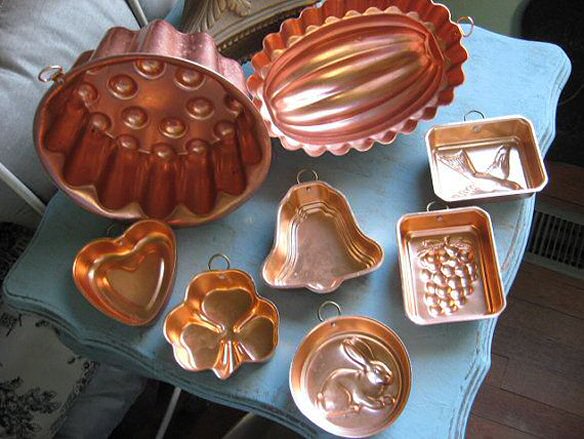 The first step in reproducing forms which are already ‘negative’ is of course to fill them in order to create solid ‘positives’ first. This should be fairly straightforward since it is what these are intended for and they’re designed with no undercutting so that the cake forms would fairly easily detach after baking. But the question in this case is what to use to create these positives .. a material which would reproduce the smoothness of the mould surface; remain durable enough to be re-used perhaps a number of times, and which would be in itself ‘food-safe’ enough i.e. not to transfer harmful substances to the silicone which would be applied to it.

The only safe option would be plaster. Filling the moulds with natural clay was suggested .. but I don’t think demoulding the clay forms cleanly, without damage, would be that easy and they could probably only be used once or twice at the most. In any case .. I’m not certain how pure, i.e. uncontaminated, natural modelling clay can be expected to be. I can’t think of any other mouldmaking or casting material that would be safe enough.

There are two ways to make plaster positives from these forms .. either filling them to make a solid plaster form or applying the plaster to build up a strong but hollow shell. Straight filling would be simpler and quicker .. but if I were doing it I’d prefer to make a shell. It’s not just because the plaster ‘mothers’ could get rather weighty for the larger forms shown above. It’s also because it’s more difficult to get a good, clean bottom edge this way.

Before applying the first coat of plaster the metal moulds need to be thinly greased with petroleum jelly. Is this safe? .. certainly, as long as it’s either ‘USP’ white petroleum jelly or ‘BP’ in the UK. This means that it has been sufficiently refined. To ensure that the ‘mother’ surface is as perfect as possible a fairly small amount of plaster needs to be mixed first and swilled around the mould. Even though it could take a while, I would continue until the plaster starts to thicken and stays put on the sides, to get the maximum coverage from it. This might have to be repeated two or three times, building up a thick coat. I would resist the temptation to brush it around because this will introduce air and disturb the Vaseline film. Once this coat has become firm more plaster can be applied but this time adding pieces of jute scrim. The scrim is there to strengthen the shell, but it also helps the wet plaster to stay put on the side walls. I would guess that if one could be fairly generous with the plaster one wouldn’t need more than 3-4 layers to make a sufficiently strong shell from a large cake mould. It is important to stop a little short of the mould edge with the scrim reinforcement .. see later. 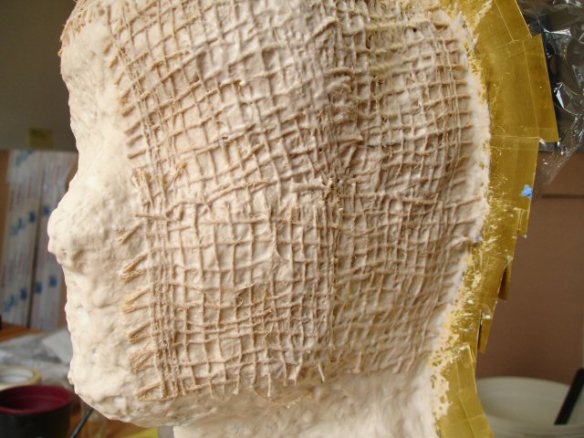 I’ve written more about working with plaster and jute scrim in the articles Making a supported silicone mould for a life-size head from which the illustration above is taken, or near the end of Making hollow casts in open or ‘closed’ moulds shown below. These are in the Methods section under Mouldmaking and casting. In these I’m building the reverse form .. building a shell around a form .. but the principle is the same, and in any case the same method will be used for making the supporting shell later. I’m also using the Jesmonite version of modified plaster for these, whereas in this case it would be better to stay with regular plaster. 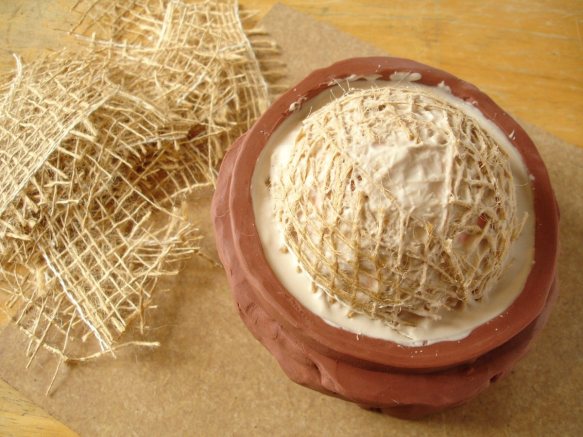 I’d recommend working with a fine, hard casting plaster such as Basic Alpha from Tiranti or Prestia Expression from Special Plasters .. see my Suppliers section. The jute scrim is also from Tiranti.

I mentioned that it is easier to get a nice, clean bottom edge to the plaster ‘mother’ form using this shell method .. perhaps not entirely true! What I really meant was that the problem with filling large receptacles to the brim with plaster (the quicker method) is that the top surface is often a little irregular and powdery when the plaster sets. Quite a bit of scraping and sanding may be needed to make the upturned form sit well. With similar work in the past I’ve found it easier to make a clean, straight edge by trowelling plaster like cement .. or like icing a cake! .. to complete the top edge inside the metal mould. One needs to take advantage of the small ‘window’ during the setting of plaster when it starts to get too thick to pour anymore but is still quite manageable as a paste. To get a smooth line it is important .. as I’d mentioned .. that the scrim reinforcement is stopped short of the edge, so that the plaster can be trowelled and smoothed without any obstructions.

If all goes well, and the plaster form demoulds nicely from the cake mould, you have a perfect ‘positive’ version .. or casting, if you like .. from which another mould can be made.