Although I’m having to keep a number of other things ‘ongoing and healthy’ at the moment I feel I’m still keeping the essence of the Thames Beach Collection alive. What I’m seeing in my mind’s eye whenever it turns to it is a strongly colourful mass of forms spread out on a surface or in a shallow container .. much brighter or richer in colour than the real thing. I say ‘mass’ because the vision doesn’t want me to see separated forms as yet, rather a combination of particles of different sizes existing together .. so that, even if one larger sculpted form attains dominance, it still needs to be seen on a bed of its smaller relations. Think perhaps of cutting up a cauliflower and a broccoli together into cookable bits and looking at the pile.

So there are what I’m for the moment calling ‘populations’ of different sizes which may be to some extent fractals of each other but in other respects definitely not .. because different physical sizes are subject to different rules. I’m thinking the smallest population should be around 4mm so that although there’s a lot of visible individual definition the mass also functions as an enlarged ‘sand’ which can be run through the fingers .. don’t forget, this is meant to be haptic! The next population is around 1cm .. it seems fitting to take a familiar but invented unit of measurement .. and one after that is around 1 inch. I’m debating whether to start with a set volume for each population size .. I mean, if I were modelling, to create each c1cm form from a 1cm ball or cube of material. This may create a unity, or it may not. I think there should be only two ‘sizes’ above the 1 inch .. the next being anything that can be enclosed by a cupped hand, and lastly anything that can be comfortably held in one.

And the signs of life theme remains strong! Each population of forms exhibiting signs from every point on the spectrum .. never having lived / of the living / artificial. The last section may have sub-divisions of its own, like .. mundane / precious / symbolic. Raw material can move around this ‘spectrum’, as I put it, and can even occupy two or more places on it at once .. the spectrum may even be circular.

Sorting out what I mean by this .. the huge majority of forms on the Thames beach are mineral, in the form of stones, pebbles, gravel, sand and mud. Their shape and size have been ‘determined’ (I use this word, aware that it’s not the right one) by an endless cycle of natural forces .. fusion then erosion. These natural forces just ‘are’, they happen, there is no ‘plan’, they have no ‘will’ or choice in this .. and likewise no individual pebble or grain of sand can exert any will or choice as to its place in this. It’s highly likely that most of this purely mineral material has never had any contact with another part of the spectrum throughout its multi-million year existence.  But amongst the natural stones are fragments of brick and pottery .. these fusions of minerals have had contact, they’ve had another life. They’ve been utilised in the making of artificial forms which are, however, now fast becoming indistinguishable from the natural again as their constituents return to the primal state. So they’re in two places on the spectrum but connected .. hence one could see it as folded into a loop. Fossils, which one can also find there, are another interesting instance! Minerals have taken on the appearance of the living .. unconsciously becoming both the mould and the cast for something wholly ‘other’ which occupies them for just a millisecond of their comparable existence. The life they reflect has no more relevance to them than a baby’s face has to mercury.

At some point in the past though, minerals started to make decisions, they found a ‘will’ and as some would have it .. they even got ‘soul’ in the end! After billions of years of arbitrary cocktail mixing it chanced that certain combinations got smart and had the ‘inclination’ to make more of themselves .. i.e. copies! .. and as it turned out life as we know it happened to become the most effective way of doing that. What were the first formal .. i.e. the visible, physical .. differences between the hitherto purely mineral world and the new, living creations? I mean the significantly ‘other’ ones, the later multi-cellular creations with definite body shape .. skipping for now the few billion boring years of microspheres, single cells .. maybe also the sponges!

When, as a boy, I was hunting for fossils there were certain ‘signs’ .. markings, shapes or combinations .. that my ‘scanning eye’ would be looking out for as something ‘other than’ inanimate stone. I suppose foremost it would be attracted to contained colour differences, or of course if there was something smooth, even shiny poking out from the stone surface .. then it would react more if there were any of the following ..

parallel lines especially crossing a contained form such as a circle or ovoid, which would start to suggest a trilobite, or the edge of an ammonite .. also if these stripes crossed a ‘string’ shape it could mean a crinoid stem

radiating lines which could mean the whole or part of a mollusc shell, or if these lines were more widely spaced (just 5 from a central point) it could mean a sea urchin .

small repeated hexagons quite clearly defined and in relief, which would mean segments of crinoid stem ..

symmetry although this is perhaps the fundamental aspect of multi-cellular bodies, it’s fairly low on the list for a fossil hunter compared to the above, mainly because fossil remains tend to lose it. However, seen against rock formations or the natural weathering of pebbles, if something has a relatively fine-tuned symmetry it’s almost certain that it’s biological! It’s certainly a factor in noticing belemnites, trilobites, sea urchins ..

repetition of any kind. Included in all of the above, and rather difficult to define further ..

segments or modules just like symmetry, not always immediately obvious in the fossil remains but an equally important fundamental of early life ..

Early this morning I went down there intent on finding some ‘inspirational particles’ but the river .. not for the first time .. had another agenda! I’d never seen the foreshore quite like this, almost completely coated from wall to water with mud. I can only guess that it was a combination of how the water had been churning previously, with zero wind as it receded to low tide .. hence also the thick fog! Despite the fact that there was no chance of ‘seeing’ anything except mud it all had such an aptness though, especially since I have been looking at Deptford history. It turned all my photos almost monochrome .. like old sepia prints.

The only things which weren’t mud-plated were those which must have been floating on the water surface .. spot the cork!

I’m trying to ‘connect and resolve’ a number of ideas. It’s strange how even seemingly unrelated things can fairly quickly find their place within a determined scheme .. when one’s concentrated .. and determined to ‘will’ them into place!

The whole thing started about a week ago while I was indulging in one of my favourite ‘time-out’ pastimes .. mudlarking! I had said ‘farewell, for the time being’ to the previous two-month focus on my own artwork, partly because ‘teaching, preparing for teaching, thinking about teaching’ had rolled in and implanted its feet once more. But I had also said ‘farewell’ to something already in the distance .. it wasn’t a good two months, it didn’t promote me forward as I’d hoped it would, thinking on it now it was rather lack-lustre and ill-defined! So the return to mudlarking was .. ‘well, hang it, I’ll do something I know I’ll enjoy’! It was also socially-linked, because on October 16th I’d invited a dear group of friends I hadn’t seen in a long while for a spot of rooting about in the Thames foreshore and a ‘brunch’ afterwards. That was on the Sunday .. and on the following Thursday through to Sunday I was down there for a few hours each day without a touch of guilt!

Until the compulsion to ‘make something’ of it set in .. as it always does! Sometimes I just wish I was free from that! But on the other hand, when those thoughts start bubbling up from below .. it’s exciting, things start to tingle, the world gets brighter and more promising! .. more importantly, it’s what I’m here for, if anything .. to ‘make something’ out of my experiences! 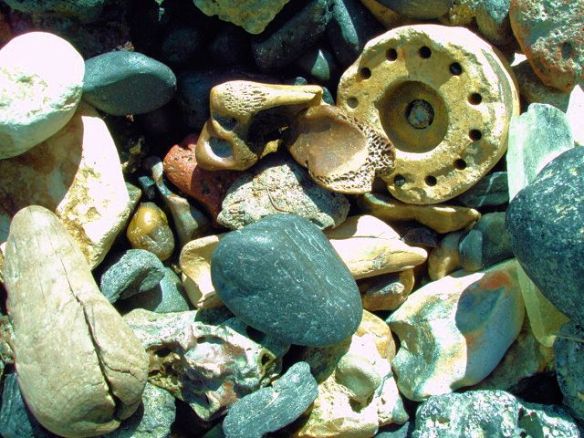 The Thames foreshore can be very ‘primal’ .. it’s a very long way from the world of apartment blocks, streets and cars just metres above it .. it’s ancient. Those pebbles may be shifted around a lot but they may have been there in some form for millions of years ..fossils are not uncommon. Then there’s the Ooze .. a mud so sticky it will suck the Wellingtons off you when you’re least prepared for it! I call it ‘zombie mud’ .. because although it’s in some ways deader-than-dead (it’s famously anaerobic, meaning without oxygen, the reason why so many things become almost perfectly preserved in it) it can appear so alive at times. Then there’s the litter of animal bones, in different states of petrification, some as heavy as stone .. reminding us what meat-eaters we are, generally, and for how long! I’ve always had vague notions about primal particles as I might call them, and at times I’ve tried to capture them .. the stuff of existence, quintessential forms which build larger forms which look very like them, and so on in fractal succession. I’m not talking about atoms, molecules or cells, though these embody similar principles. The Thames foreshore is not a place of formation though .. it’s the last resting place of visible matter before it becomes small enough to start again!

Then there’s another big one that’s been on my mind lately .. serendipity. The notion that if one’s a good person fate will be kind, or at least nudge an attentive person into making the right discovery. If you do go looking on the Thames beach you’ve got to go there feeling that you have the ‘right’ to find something, some thing that you and maybe you alone will appreciate .. regardless of it’s material value. It’s lying there for you .. if you happen not to see it, it wasn’t.

So all these thoughts, and many more, justifying why I was spending time down there .. but it all paid off! Now every time I’m drawn there when I should be doing something else I can tell myself I’m pondering on greater purposes!