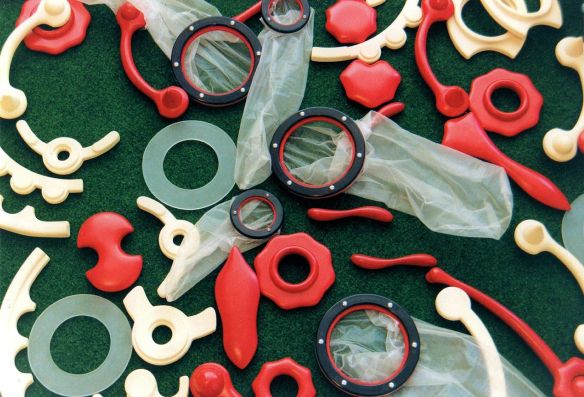 Engelsknochen ( Angelbones ) was my first proper ‘variable system sculpture kit’ (as I persistently tried to call it, however clumsy) comprising cast and painted forms arranged on a green playing-field. I also liked to tell people that my initial inspiration came from imagining what the bones of angels would look like if they had them .. and it was, but it was more about the ‘bones’ of my favourite shapes.

Gallery visitors were encouraged to take the forms out of the sacks and these were returned at the close of each exhibition day. The tactile experience was an important accompaniment to the visual, and I felt that if visitors had the opportunity to take forms in the hand their experience of the work would be closer to my own. Most forms were designed with the dimensions of the hand in mind.

Although constructional toys influenced both the presentational style and the colours/finish chosen for the component forms, the main inspiration for these forms came from the ‘organic’ or archaic. I found it increasingly interesting to juxtapose expectations of irregularity, intricacy or roughness implied by the ‘zoological’ or archaic with the simplification imposed by industrial mass-production and modernist design. Easy for me to say .. well, actually not .. but what I mean is, I love balancing natural with artificial. It’s almost like that’s the ‘leitmotiv’ for human existence .. we can’t ignore nature but we’ve got to smooth the rough edges.

Apart from ‘playing fields’, wall racks or ‘sand pits’, I explored a number of other methods of variable assembly or presentation at the time .. such as temporary fixing with denture paste, using magnet inserts or pinning to cork boards.

Sleep 1995 was the ‘sand pit’ idea .. the forms were half-buried in a pile of dyed cork granules on the floor. I regret being so haphazard in terms of documenting my work at the time .. I only have this detail photo, not a complete view. I was thinking of the rich, dark red chrysalis forms I used to unearth in the garden when I was a child .. I thought these were butterflies but I now know they were moths. Not that it should make any difference to the magic!

Everybody used to do either the ‘suitcase handle’, the ‘headphones’ or the ‘phone receiver’ gesture when handling the ones that look like .. handles. Fair enough, but it got a bit annoying after a while. The reason I made them this unusual shape was because it added some ‘movement’, almost suggesting forms diving from one place to another. It may have been more appropriate to the theme to keep the forms very ‘still’, but I remember the way the little red chrysalis things used to flex sharply when touched.

But we become victims of our creations! This photo was taken for a magazine article at the time. I can’t think where the ‘elevated’ hair came from .. it may have been given to me on the day.