I don’t normally think of working with alginate, mainly because .. I don’t do much life casting, I need the moulds I make to last and I rely on being able to cast in resins .. but recently I looked at alginate a little more because I wanted to include a very quick and simple demonstration of mouldmaking in a short session at Central Saint Martins. I had always assumed, firstly that alginate will only be strong enough if mixed (as standard) 1:1 with water to form a spreadable paste and secondly that the water retention of the set alginate (which it needs to maintain its shape and flexibility) rules out casting resin into it. I’m glad to have found out that I’ve been wrong (sort of) on both counts!

It’s true that most of the advice available on working with alginate focuses on its primary use as a fast means of making life casts (from a human subject) and that for this a spreadable paste is more practical. Alginate is skin-friendly, free of any health&safety issues and sets rapidly (2-3mins fast set or 6-8mins slow set types). It was probably first developed for dentistry. When part of the body, such as the face, is being moulded the alginate layer needs a rigid shell (plaster&scrim or ‘Modroc’ plaster bandage) applied over it, otherwise it won’t keep its shape. Alginate will reproduce the minutest details of skin texture unbelievably well and a fine casting plaster is the obvious choice for converting this impression into permanent form. It may be more for these reasons that casting in resin hasn’t been explored that much.

The alginate on sale in the Central Saint Martins college shop (one I hadn’t used before) outlined two mixing options on the packet; either mixing 1:1 with water by volume to make a paste or 1:2 (double the amount of water) to make it pourable. If this worked and produced a quick and relatively stable mould I could then try my other theory that polyurethane resin could set within the alginate if the mould were Vaselined, meaning that I could demonstrate the basics of mouldmaking and resin casting within an hour. The alginate was the slow set ‘Connoisseur’ brand from South Western Industrial Plasters www.industrialplasters.com being sold at the college shop for £10.50 per 550g. I’m assuming for the moment that other brands can be mixed similarly, to make either a paste or a liquid (whether stated on the packet or not) but one would have to test this oneself first. 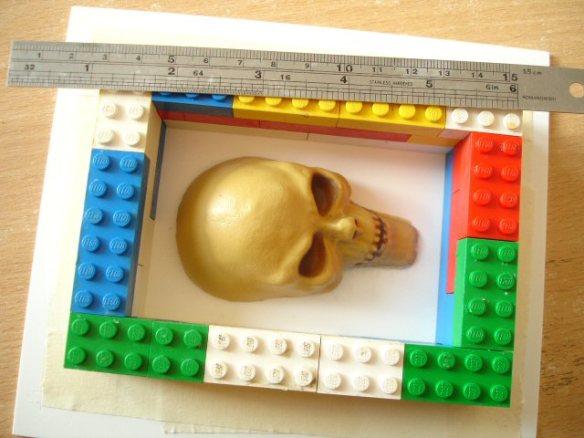 For Halloween I’d bought a string of plastic skulls in a local £shop and I decided to use one of these as a test model. The thin plastic was easy to slice in two halves (just the front half shown here). When making simple 1-piece poured moulds one of the most important things is making sure that the prototype form is firmly fixed to the baseboard and that there are no gaps around the edge for a fluid casting material to run into. In this case I superglued the thin plastic to a Pvc base and filled any cracks with plasticine. I prefer to use foamed Pvc as a baseboard for moulds because it releases well from most things without greasing and the flex helps when demoulding. Any type of board can be used as a base as long as it’s flat and the surface is relatively smooth but if something absorbent like cardboard is used the surface inside the mould box needs to be Vaselined.  Lego is also commonly used to build quick, stable containment walls for small moulds and is, obviously, reusable. I took the precaution though of Vaselining the inside surface especially at the base. If this is done it’s only necessary to secure the mould box down with masking tape around the outside edge. The only other task here before mixing the alginate was to calculate the volume to be filled. This need only be a rough guess, but it is important not to go way off the mark with this, especially if working with a relatively costly material such as silicone. I’d built the Lego wall up to about 1cm above the highest point of the prototype, so I wanted the whole box filled. Length x width x height of the inside measurements gave altogether 240 cubic centimetres, and I guessed that the prototype took up around 40 of these, so I needed a total amount of 200 cubic centimetres (or ml) of mixed alginate to fill the box. There is another, perhaps quicker, way of measuring the container volume using rice grains or anything similar, by filling the mould box, tipping them out and measuring the amount in a calibrated beaker. But it’s important to remember to do this before the interior is Vaselined!

I found out, by doing other tests, that if the alginate is mixed with double its volume in water (for example 100ml of alginate with 200ml of water) the resultant mix is almost exactly double the volume of alginate used i.e. 200ml. This volume does not shrink as the alginate sets. I’d be surprised if this applies only to the brand of alginate I’ve used but, as before, it’s always better to make one’s own tests with other brands.

Alginate comes as a lightweight, fluffy powder which looks a little like plaster. This one had a greenish tint; there are others which are purer white or even coloured blue. It should not be mixed like plaster (i.e. sprinkled into water) because being light it will mostly just rest on the surface. Instead the alginate is put first in a mixing bowl and the whole amount of water then added to it in one steady pour, trying if possible to soak the alginate down in the process. I preferred to use a large hogshair painting brush as a mixing stick, and this needs to be done quickly .. though not frenzied! .. until the mixture is a fairly even consistency like thin custard. One shouldn’t take more than 1 minute to do this. The mixture should then be poured steadily over the prototype and the mould immediately tamped (knocked) to dislodge any trapped air. The brush can be used to assist the alginate into crevices or undercuts but there isn’t really time for a separate detail coat. In the case of alginate (or when pouring most mouldmaking materials for that matter) it’s better either to pour from one corner of the mould box and slightly tilt it to assist the flow or encircle the prototype while pouring to cover the baseline first, letting the liquid level rise up naturally all round. Either way, what one should try not to do with a relatively fast-setting liquid is what I call the ‘pudding’ method of pouring it directly on top so that it runs too quickly down the sides because this is more likely to trap air.

I waited 15 mins to be safe, before dismantling the mould setup. The top surface of the alginate was firm but rubbery to the touch, very similar to tofu! Great care needs to be taken in handling alginate moulds especially, as here, stand-alone block moulds without a protective ‘jacket’ or support. It’s much tougher than blancmange, even if mixed with this amount of water, but should really be treated as if it were. Here the alginate released itself very readily from the prototype and baseboard.

There were one or two air bubbles (not usually considered a problem because they become little ‘warts’ on the casting which trim off very easily) but otherwise the detail reproduction was excellent! I left about a centimetre margin around the prototype form when planning the mould box but I’d recommend more (in retrospect) to ensure the alginate keeps its shape when filled.

My aim in trying the alginate out for this type of mould was purely to demonstrate many of the principles of mouldmaking/casting quickly. Normally silicone rubber would be a much better option and the mould would last. Alginate cannot take much flexing before tearing and (according to most reliable sources) can only be used once or twice immediately to make a cast. The water making up part of the volume will quickly evaporate, distorting the mould. Almost as soon as it was demoulded I dried the surface carefully with a tissue (dabbing, not rubbing) and gave the inside a thin but thorough brushcoat of Vaseline. I then mixed up the usual polyurethane resin I use, Biresin G26 from Sika (£35 per 2kg from Tiranti in London). I waited to pour until the mixed resin was quite warm in the cup just in case the curing needed some help. There was still time left to agitate it a little in the mould.

Polyurethane resin (at least, the G26 brand) shows a rapid change when setting, from translucent beige to opaque ivory. The greater the volume of resin mixed the quicker this sudden clouding will appear because the chemical reaction creates heat which in turn assists the setting, and it will start in the thickest parts then slowly work its way through to the thinnest where the heat is being lost. The resin form can’t be taken out of the mould until the colour is uniformally light/opaque up to the edges. In this test I noticed that the outer edge of the resin (nearest the alginate) stayed uncured for a bit longer than usual. This was probably due more to the coldness of the mould (because the evaporating water cools it) rather than any contact with the water itself. As it happened, the cast appeared set enough after 20mins which is a fairly average amount of time to wait.

.. and the cast was absolutely fine! When resin fails to cure due to ‘adverse influences’ the surface is often either tacky or ‘sweaty’ or so like treacle that it doesn’t detach from the mould, and there was none of this. As I say .. repeatedly .. if you want the very best detail reproduction from a mould that may last for years of repeated use and minimal compatability issues with other materials you have to go for silicone rubber. But it’s good to know that something like alginate can stand in, for perhaps a few casts .. in an emergency or on a low budget. When mixed in this way alginate is about a third of the cost of silicone rubber. I haven’t yet looked at how successfully an alginate mould can be preserved i.e. by wrapping in clingfilm and putting in the fridge. If it’s left out normally after use, it goes like these … 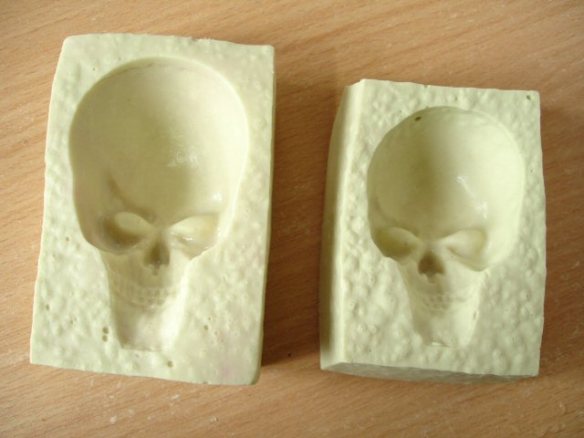 To the right is the test mould after a few days and beside it a newer one after one day .. and the older one still has a lot of water to lose!