Stencil card (aka ‘stencil paper’ or ‘oiled manilla’) is a strong thin card treated with linseed oil which makes it even stronger and partially waterproof. This also stops it from ‘furring’ .. that is, cut edges stay quite sharp even if handled a lot. All this makes it ideal for the creation of small-scale, intricate forms especially furniture. It has quite a pleasing ‘wood’ colour as it is, but it will also accept woodstain or paint very well, even water-based such as ink or acrylic. It can also be scraped with sandpaper to give it the appearance of wood and this will be enhanced by staining (see below).

Below is a method I’ve developed for making many forms of furniture, principally chairs but also cupboards and even tables, and best suited for 1:25 scale. The most suitable stencil card is the thicker version (375 microns). A double thickness of this will be used. For a start, I always draw plans for furniture first in a larger scale such as 1:10 on an A4 sheet (easier to design and draw) then reduce on the photocopier (40% to scale from 1:10 to 1:25). It means I can use the same template/design again in the future. The drawing should lay the parts of the furniture out as if ‘flat pack’ ready for building. Remember that in designing this you have to take account of the final thickness of the card which will be aprox. 800 microns, in other words 0.8mm.

Note 2016 You will now find most of the drawings used in this article .. and more! .. in the Methods section entitled Template drawings for furniture model-making

First you spraymount your 1:25 paper template onto the stencil card (shown at the top of the photo below). Use the permanent type of spraymount and spray a light covering .. never thick. Test the fixing of the paper template by trying to move it around. It should be stuck fast almost immediately, if not you’ve used too much spraymount and you need to wait a little longer. If stuck fast you can begin cutting.

I recommend using a Swann Morton scalpel (No 3 handle) with a 10A blade for all intricate cutting. Work from the centre outwards, cutting the interior parts first before cutting the outline and removing the piece. Having a small (15cm) metal ruler for this kind of work is very helpful. The first pass with the knife (when cutting anything except thin paper) should just be a guiding score to establish the position of the cut, without a lot of pressure. You’ll find the groove again with the knife point on the second pass and this time you can press harder.

When all the pieces are cut out glue them back onto another piece of stencil card with the drawing side down (shown on the left above). You can use spraymount again if you wish but thinly spread Pva will also work for these small pieces. If using Pva it is best to lightly scour the stencil card surface with fine sandpaper to give a better key for the glue.

Test again that the pieces are firmly stuck and now you can cut around them using the raised edge as a guide. Cutting through the second layer of stencil card will be a little easier this time because the first layer guides the knife. As a general tip, intricate cutting is always made a bit easier if you first do a rough cut fairly close (aprox 1-2mm) outside the line. When you cut on the proper line the material parts better because it has somewhere to move to.

I would recommend using superglue to fix the furniture parts together properly once you have cut them. Pva glue (especially a good wood glue such as Evo Stik) will work fairly well but will not bond as strongly. Edges may need two careful applications of superglue because the first tends to soak in too quickly.

I’ve managed quite good results with the method of cutting/scoring/bending single thickness stencil paper. For example the legs of these chairs above and of the table following were drawn out as a continuous strip, cut out and carefully scored with a scalpel to bend them at the corners. By these means one can create a slender scale form which is reasonably strong and fairly convincing looking, if not totally ‘realistic’ (photo Astrid Baerndal).

In the photo below the heavy panelling surface was created mainly by scoring/bending. Here the forms have been darkened using spirit-based woodstain. Water-based media, including acrylic painted or rubbed in thinly will also work but there will be some warping of large flat surfaces. It’s best to let these dry and then carefully bend them straight again and even better if this can be done before assembling (photo Astrid Baerndal). 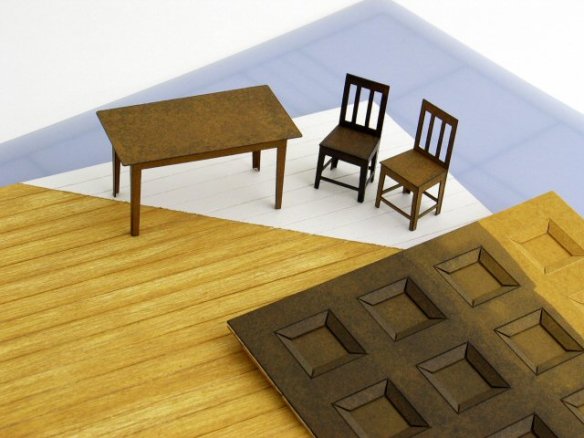 Below is a very convenient way of creating louvre shutters, also by cutting/bending, although it may need some practise! I’ve cut horizontal slits in the card and carefully made a further ‘nick’ with the knife above each slit either side, so that the slats end up quite slenderly attached. The slats can then be forced to bend, best done by inserting a small metal ruler and tilting upwards. These can be quite fragile left as they are but can be strengthened by placing spots of Pva glue on the back face where they attach (photo Astrid Baerndal).

I recently tested whether I could give the stencil paper a woodgrain look by firmly scraping with sandpaper (c. 120 grit best) and this worked even better than I’d imagined. Normally sanding card wouldn’t do much more than ‘fuzz up’ the surface but because of the hardened linseed oil treatment the surface scratches rather like soft plastic. For these cupboards I prepared sanded strips which were then used to clad boxes made in PVC. More detail can then be added using small strips. Spots of superglue had to be used to stick card to plastic. 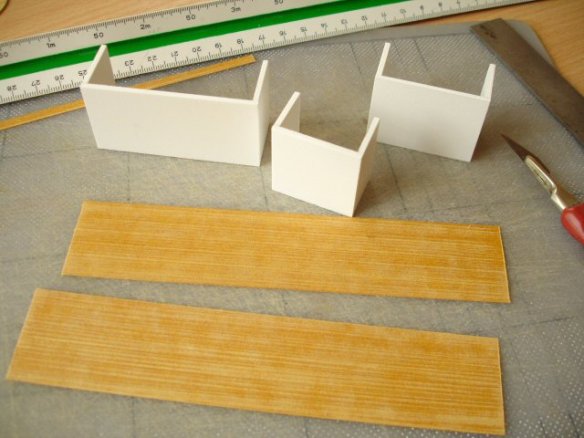 The cupboards here are ready for staining. In addition to commercial woodstains, liquid shoe polish works well as a stain and will include some shine if more than one coat is applied. A cheaper alternative to buying woodstain is to dissolve a suitable colour of oil pastel or even solid shoe polish in white spirit. Tests always need to be made first and below is part of a collection of colour swatches. To the left is a scraped but unpainted sample next to two which have been stained with liquid shoe polish and a stronger commercial stain. 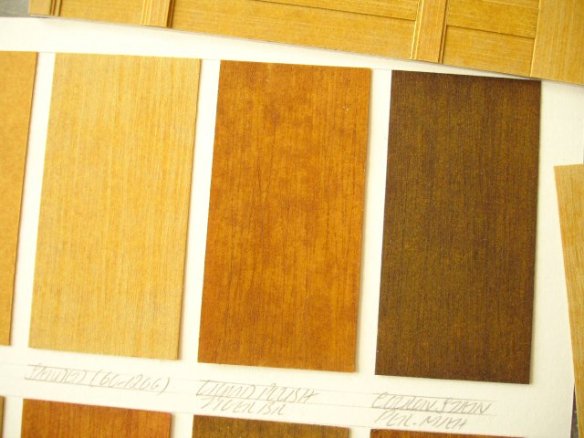 I’ve developed the technique of graining the surface mainly as an easier way to convey panelling or floorboards on a small scale, for which I would first prepare a large piece and then cut into strips following the grain. In trying the grained surface when making the chairs or table components above it’s important that the grain doesn’t noticeably go in the wrong direction, which it will in the case of some cutouts. It may be better to scrape pieces carefully once they have been cut out, varying the direction.

Below is a piece of panelled wall in preparation with the first stage of the window structure. Stencil paper is the ideal material for managing a fine, controlled cut-out which can then be added to on top to give it more strength and profile.

Here I am adding very thinly cut strips of 0.8mm obeche wood to the stencil card using slightly thinned PVA applied with a brush. This is certainly delicate work, but not half as painstaking as it would be if the stencil card template wasn’t there to keep everything in its right place. The combination is also surprisingly strong!

Lastly, making cut-outs in stencil card offered me a way of tackling the intricacy and regular symmetry of this brass chandelier form, although it is by no means a perfectly easy and quick solution. Each segment is carefully cut from a single card layer and superglued to a central styrene rod. Sequins happened to work well for the candle saucers and the rest was painted with a fine-tipped gold Edding pen.

Where to get it in the UK and abroad

For a thorough list of sources in the UK and a comparison of current prices see my page Updated sources/prices of specific materials which you will find in the Suppliers section.

Oiled manilla stencil card is fairly common to UK art/craft shops and online, and I’m guessing that in most cases this is in the form distributed (though not manufactured by) Winsor & Newton. It has been very difficult to trace who actually makes it .. but recently with the help of comments posted here we’ve been able to narrow it down to Grantham Manufacturing Ltd, a specialist packaging paper manufacturer in Lincolnshire. I include this just for information because they don’t sell it directly themselves.

The regular art shops sell it at quite a high price, averaging £4-5 per 760x500mm sheet, presumably because they have to add on Winsor & Newton’s mark-up. But there are other sources, specifically gilding/restoration specialists such as Wrights of Lymm or A. S. Handover in London who offer it far cheaper in a larger format 1000x600mm.

I’d always assumed it was produced as an art/craft material but I’m beginning to realise it’s another of those things that has become appropriated by the art/craft market but ‘makes its living’ elsewhere. Machine-cut stencils are still used, particularly in the shipping industry, for quick tagging of goods and oil board is produced mainly for this purpose. The oil in this case not only protects the stencils from water-based paint or ink (meaning that they can be used over again) but acts as a lubricant for the stencilling machines.

Over the years I’ve had many enquiries from the US because there the web-search for ‘stencil card’ or ‘oiled manilla’ hasn’t yielded much! I’m now fairly certain that if you use the terms ‘oil board’ or ‘stencil board’ you’ll have more luck. There would seem to be two standard types in the US though .. one which is tan/yellow and looks like the type I’m using, and one which is darker cardboard-brown which I haven’t seen here. Obviously I can only vouch for the type I have here but the other may be just as useful or even better .. you have to try it! The other bit of advice is that when this material is marketed via an industrial stenciling or ‘marking’ company, as is more common in the US than here, it’s often in an inconvenient format or an inflated price! I suggest you look for the 18”x 24” sheets, and here are some of the better options which I’ve researched recently (October 2014):

So far I’ve just dealt with the US in terms of ‘abroad’ because almost all the enquiries I’ve had have come from there .. and many thanks to those who’ve contributed information! If I find out anything useful for other regions I’ll include it here.

80 thoughts on “Working with stencil card”