Here is a quick article describing a technique I’ve been developing for creating pressed patterns in soft foam using specially modelled tools. The advantage of creating a small area of defined pattern which can be repeatedly pressed (in this case a particular type of old street cobble), apart from saving time, is that it gives the patterned area a certain regularity. The direction of the pattern or the pressure used can be varied to prevent any look of obvious repetition but there is a natural unity and a rhythm to it.

Super Sculpey is the best material I’ve found for creating these press-tools. It allows complete versatility in modelling and is strong enough when properly baked to make a lasting and, if need be, quite deep impression on soft foam. Milliput will set just as hard and durable (if not more so) for repeated use, but I find it too resistant when soft to allow enough control over detail modelling. The polyurethane foam in Kapa-line foamboard is by far the most suitable foam to use because it has a fine structure which will reproduce impressions minutely .. you could even read the year on a coin if pressed firmly in. I can’t vouch for other forms of polyurethane foam. Black foamboard foam, styrofoam (the blue kind) or Depron .. all of which are styrene rather than polyurethane  .. will yield some kind of impression in their different ways but they really can’t be compared. These have much more ‘spring-back’ i.e. when the tool is released the foam expands back a little. 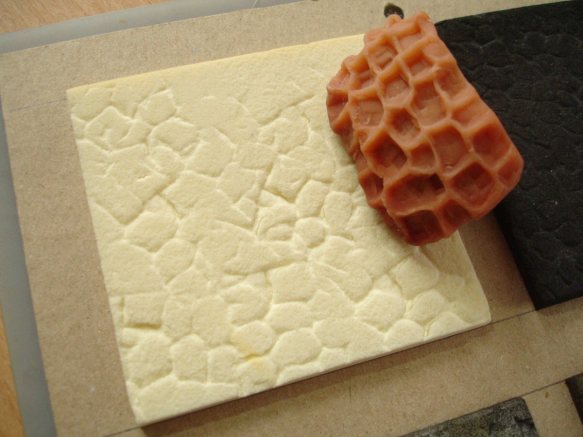 Here I’ve mainly used the blunt ends of disposable chopsticks to create the negative cobble-stone shapes in a piece of Sculpey. The walls between, which become the cracks in the positive pattern, need to be carefully pinched up, ideally tapering to sharp ridges. If not they will look too broad or not be deep enough in the positive. Even more important, the modelled pattern area should have a roughly convex shape so that it can be rocked while pressing. Usually if the press-tool is too flat it cannot be pressed firmly enough into the foam without breaking .. but a curved shape focuses the force like a lever. With this one I’ve also pinched a shape at the back for holding the tool better. This block measures about 5x3cm with an average thickness of 1.5cm. The manufacturer’s directions for baking Sculpey recommend that the oven is brought to 130 degrees C and the form left there 15mins for each 6mm of thickness (i.e. average 18mm needing 45mins). This may be sufficient for forms which are not going to be subjected to much strain or when trying to preserve the flesh colour of Super Sculpey but for a full and even hardness throughout it’s usually better to leave thick forms in for longer. I prefer to leave these in the oven until they’ve darkened almost to a chestnut brown colour, then turn off the heat but allow the forms to cool down in the oven before removing them. The extra baking will not distort or shrink the forms any more than normal, but it will make them much tougher. 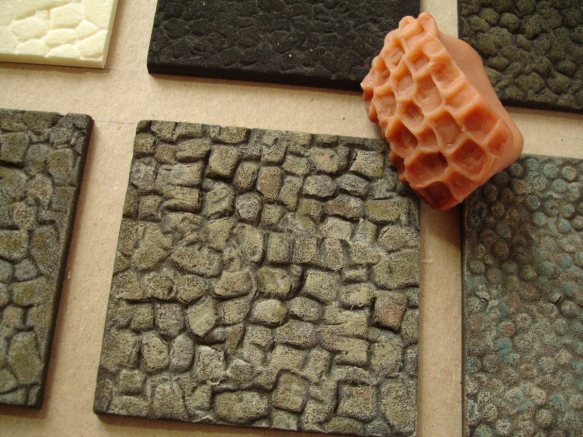 These surface samples represent very basic painting but show the steps, from top left to bottom right, beginning with a dark base color and gradually working from dark to light, dry- brushing successive colours. Dry-brushing is best done with a full-haired but relatively soft brush containing the minimum of paint and using a careful ‘dusting’ action similar to applying blusher make-up. The highlights of the texture are emphasized first, while the depths remain dark. Here I’ve used a particularly opaque, matte acrylic made by Rosco for scenic painting but any opaque, matte acrylic can be used .. for example the ‘Americana’ or ‘Crafters’ ranges from DecoArt are excellent model-making paints. Gouache also works well because of it’s opacity and adding a little Pva glue to it will make it more durable.