The original ‘Super Sculpey’ is a soft modelling material, flesh-pink in colour, and one of a number of polymer clays available which share similar properties. Polymer clay is composed of finely ground PVC particles held together with binders and plasticizers. Upon heating the plasticizers evaporate and the PVC particles fuse together. When properly baked Super Sculpey is very hard but retains a slight flexibility i.e. it may crack if dropped but is unlikely to shatter. Super Sculpey, along with the rest of the Sculpey range, is made in the US by Polyform Products.

Super Sculpey is popular in both the film and toy-making industries as a material for character maquettes. It is very even and fine-grained, suitable for fine detail and with careful working can be smoothed to an almost glass-like surface. But it can also be worked into a very soft state between the fingers so that it can be applied, much like fresh natural clay or soft modelling wax, in an almost smearing action.

Advantages of using it

It is an ideal modelling material for those who are looking for something similar to plasticine but which can be made permanent if needed. But it is also not as sticky as plasticine can become when working. Fingertips do not feel caked and modelling tools remain clean. An important advantage of this is that it takes impressions very cleanly; the best way of modelling with it is by ‘impressing’ and even things like fabrics or soft brushes can be used to texture the surface.

Like other polymer clays, Super Sculpey is notable for having a certain tear strength or elastic cohesion when being modelled. What I mean is that, for example, if Super Sculpey is rolled into a very thin, flat sheet and then pulled it will hold together better than most other modelling materials. In spite of this I haven’t noticed much of that rubbery ‘push back’ that I would expect (as the downside) from a material with this cohesive quality.

The advantage of modelling in polymer clays is largely that of speed in processing (as opposed to speed in actual modelling) because all or parts can be relatively quickly fixed (hardened) without having to wait either for evaporation of solvents or chemical reaction. If the work is going well, the momentum can be preserved! Larger forms are best tackled in layers, starting with a core shape which can then be hardened before adding more. This means that new modelling is always firmly supported, avoiding the danger of distorting what’s underneath. If changes need to be made, making it necessary to remove material already hardened, Super Sculpey can be easily sawn or chipped with a strong knife. The manufacturer recommends that it needs approximately 15mins in an oven at 130C for each quarter-inch of thickness. A standard heat gun is effective (if careful) for even quicker hardening though this will only work properly for very thin forms (i.e. 5mm or less) or if a larger form is baked in successive thin layers. As long as the oven doesn’t exceed the recommended temperature or the heat gun isn’t focused too long or too close on one spot it doesn’t matter how many times a Sculpey form is heated up. Super Sculpey will darken as it bakes, this is normal. In fact, if there is no noticeable colour change once cooled and taken out of the oven it’s probably not baked enough. Prolonged baking will not cause the material to shrink more (as a rule shrinkage is confined to about 2%), nor lose detail or distort as long as the temperature remains under the limit; it will just darken and become harder. In fact, many experienced modellers prefer the ‘long and slow’ method, baking Super Sculpey until it is nut-brown. This hardly matters if the form is going to be primed or painted anyway, or if it’s intended as the prototype for mouldmaking/casting. It’s certainly better to overcook than risk not baking enough or not evenly, because in this event it is guaranteed to eventually crack of its own accord or start flaking in areas.

All polymer clays, even across different brands, can be intermixed (having basically the same ingredients) so that colour, pliability or strength can be altered. For example Super Sculpey can be combined with more opaque types (such as white ‘Sculpey Original’ or Super Sculpey Firm) to create a more ‘visible’ surface. It is best to make a few blending tests using different proportions because not only colour but the consistency will be changed.

No hazardous ingredients are listed in the MSDS sheets I’ve looked at, no precautions necessary and no first aid measures advised for over-exposure. To be cautious though I’d recommend anyone planning to bake Super Sculpey in an oven to do their own check (at the least an oven temperature test) because I find it strange that that there’s no reference to the type of fumes which are released if the material burns.

Because Sculpey does not stick to the fingers I’ve usually found that it’s easy to achieve a smooth surface just by persistent  stroking with the fingertips, perhaps combined with raising the temperature just a little by placing it on a warm radiator or putting in a warm place for a little while. I wouldn’t recommend fanning it with a hair dryer even on low setting because this will evaporate some of the plasticizer.

Another method which facilitates getting a smooth surface is actually modelling through a layer of cling-film! I’ve used this to control modelling when using wetter materials such as plaster or softer such as modelling wax either as containment or to give the surface a little more ‘rubbery’ firmness while working. In the case of plaster the cling-film needs to be left on until it’s set but in the cases of modelling wax or Sculpey it can be removed straight away.

Other methods of smoothing include ..

.. wetting fingers or tools with water. This will not dissolve the surface as it does with natural clay, paperclays or Milliput; it is actually the opposite, using the water film as a buffer, similar to the cling-film. It’s worth trying this with a smooth but firm brush i.e. flat and synthetic hairs to see whether results are better than using fingertips or modelling tools. I would recommend employing brushes with the following, which do dissolve the surface

.. using ‘rubbing alcohol’ which should be obtainable from pharmacies i.e. Boots in the UK. Work carefully to avoid too much sticky build-up.

.. using Sculpey Diluent in the same way, which can usually be bought from suppliers of Sculpey and made for this purpose or for reviving desiccated Sculpey.

Super Sculpey will keep for a long time without alteration, though not as indefinitely as modelling wax. For example, even if unused, roughly a year after buying it will be noticeably harder, slightly drier to the touch and may even have started to crack because the plasticizers start to escape. It is still usable but it will need more prolonged conditioning i.e. working between the fingers, repeated rolling etc. to revive it, and if the original ‘factory’ softness is preferred a little Sculpey softener will need to be worked into it . However this additive is quite expensive. There is a lot on the Net attesting to the success in using alternatives such as mineral oil or baby oil, thoroughly mixed in. 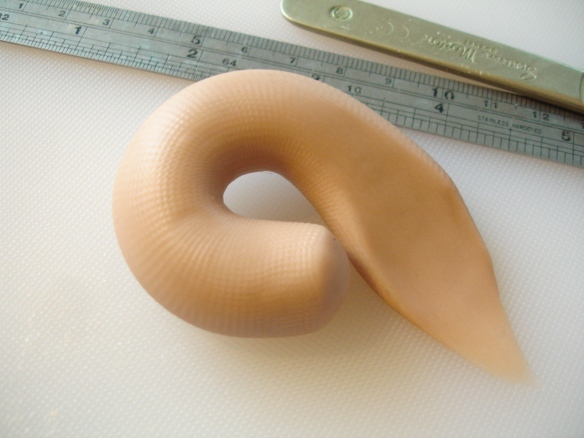 The photo above shows the test I make after reconditioning any old Super Sculpey. I do this in 50g pieces, because I’ve found that I can comfortably enclose this amount in my hand. I usually keep the hardened/dried Sculpey in my closed hand for a few minutes first because this minimal heat will begin to soften it, at least enough to make rolling easier. I do the rolling on a clean polyethylene chopping board, first rolling out gradually into a thin string, winding this together again and repeating. The slight texture of the chopping board not only makes rolling easier but also contributes to the ‘tenderising’ process. If the Sculpey has become so pliable that it can be bent into this curve readily and without fracturing, and if I can ‘smear’ the other end with the fingertip evenly, the clay is ready to use.

What it can’t do

Super Sculpey is only available in two colours ( the original flesh-pink, and the significantly harder ‘Super Sculpey Firm’ which is mid-grey ) and in one pack size of c. 450g. There are no larger packs or discount quantities available in UK shops as far as I know.

On the one hand Super Sculpey has an attractive and suggestive skin-like surface, not only because of the colour but also because it is slightly translucent. On the other hand this means that very fine detail becomes difficult to ‘read’ properly while modelling. As mentioned above, this can be solved by intermixing with some more opaque polymer clay.

Like modelling wax, Super Sculpey is not good at sticking to other things, even those with a rough or porous surface so if modelled in combination with other materials (for example if harder ‘found’ forms are embedded in the modelling) the joins have to be checked prior to mouldmaking. Related to this is another slight drawback during modelling; that it neither sticks nor merges as readily to itself as natural clay, modelling wax or plasticine. It needs much more coaxing; for example, when adding more Sculpey to a surface it is often not enough just to smear and rub over.  A ‘ghost’ of the joined edge may remain stubbornly unless firmly scored, feathered and smoothed.

The manufacturer warns that there are incompatibility issues between Super Sculpey and oil or solvent-based paints and recommends either priming with an acrylic base first or painting solely with acrylic paints.

SG (‘specific gravity’ i.e. weight per 1 cubic centimetre) is 1.34. This is based on my weighing a fairly exact 100ml volume. I could find no official SG published.

What it costs and where to get it

The following example prices were updated March 2020 and are adjusted to include VAT.

Super Sculpey is one of the most economical polymer clays .. though polymer clays are on the whole not cheap compared to other clays. Prices for Super Sculpey have increased a lot in recent years. The average price one should expect to pay for a 1lb (US) 454g box in the UK spans £12-£17. At Tiranti’s in London, which generally has very reasonable prices, a box currently costs £12.71 for pink and £13.87 for grey. From most other suppliers (including online) the price is much higher i.e. £17.50 at 4D modelshop, though at this time of writing the online supplier http://www.craftyarts.co.uk is offering grey for £11.92 and pink for £13.24.

www.glassattic.com This is an unbelievably vast collection of links to polymer clay information painstakingly put together by a real enthusiast!