There are various different types of ‘Kapa’ brand foamboard. Most of them differ from regular foamboard in that the paper covering can be carefully peeled off to use the soft foam layer beneath. This foam layer can be easily inscribed, carved, sanded, embossed or generally ‘broken down’. The product named ‘Kapa-line’ (with an ivory/beige foam inside) is the best to use for this purpose, available either 3, 5 or 10mm thick. Below, the paper layer needs to be carefully peeled off in strips to avoid damaging the foam surface too much. The foam is polyurethane (different from the polystyrene in standard foamboard) and is stronger, much denser though still soft. It can also be glued well with solvent glues, including superglue, without dissolving. It accepts all paints very well, even thin watercolour, and I’ve used either DecoArt or Rosco acrylic for these examples.

Once the paper has been stripped (on one side or both as one prefers) it is usually not robust enough on its own for larger constructions such as walls. It should be glued to a stronger (card or plastic) backing form. This should be cut out first, including any door and window openings . For a simple rectangular wall the foam can be stripped on one side and glued to the backing form paper side down. Its easier to cut the piece a little bigger and trim it once on the backing. Either permanent spraymount, UHU (applied on both sides as a ‘contact’ adhesive) or a good double-sided tape can be used. If the template backing form is complicated (with doorways and windows) I recommend removing all paper from the foam sheet, gluing as above, trimming close but not quite on the outline and sanding down-‘squaring off’ the edges using a right-angled sanding block as shown below. In fact this particular example was clad piecing together separate strips of foam to achieve square edges around the window and doorway without having to sand afterwards. All that then needed sanding were the outside edges. 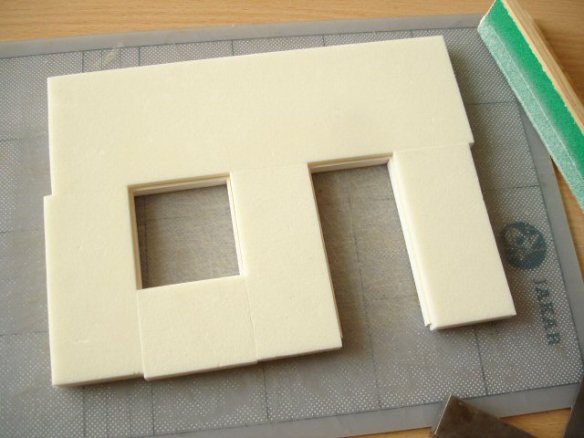 Different kinds of brickwork are simple to achieve in the foam. The main tool needed is just a ‘push lead’ pencil (0.5mm best for 1:25 scale work). Brick divisions or ‘mortar lines’ can be inscribed in the foam (horizontal lines first) guided by a ruler and not pushing too firmly with the pencil. It’s best to start with a gentle stroke but this can be followed by a deeper incision if a more pronounced effect is wanted or if one purposely wants to fracture the line a little. I recommend taking the trouble to draw up a small sample of scale brickwork which can then be used to mark spacings. The brickwork template shown represents the ‘Flemish bond’ arrangement of bricks common for most structural walls especially in older buildings. Make sure if you can that the brick arrangement fits in ‘comfortably’ around openings. Vertical spaces between bricks are easiest achieved by pushing with a small screwdriver or a piece of wood you’ve shaved down to a similar shape.

Here I’ve started to make the brickwork look more ruined by ‘scratching’ away with the point of a scalpel. Alternatively a small piece of wood can be used to push single bricks or whole sections in. Once pushed they will stay and will not expand back even with painting. I have crumbled the surface even more by beating it with a small wire brush. 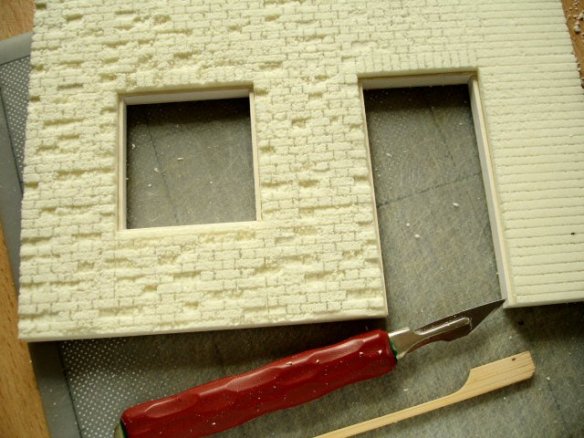 I always paint a thorough basecoat on surfaces first, often a ‘mid’ or average colour, and then achieve most of the final affect through dry brushing on top.

As well as using pencil or wire brush to create effects, I often impress the ends of metal tubes, in this case creating the effect of street cobbles. 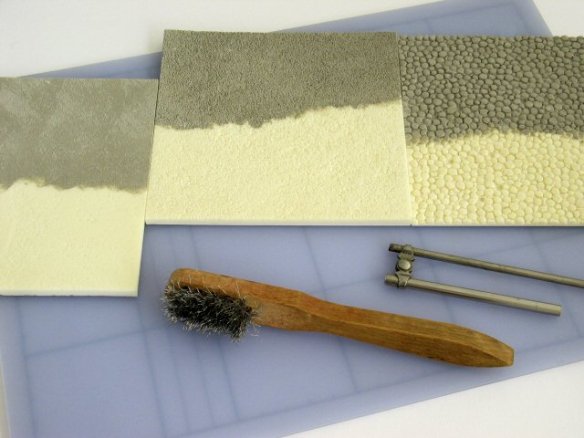 A fairly recent discovery of mine was that, if a small wire brush (available from £shops usually in packs of 3) is dragged strongly a few times over the foam surface it gives a texture not unlike heavy, weathered wood. These samples have been basecoated, awaiting their final colours. 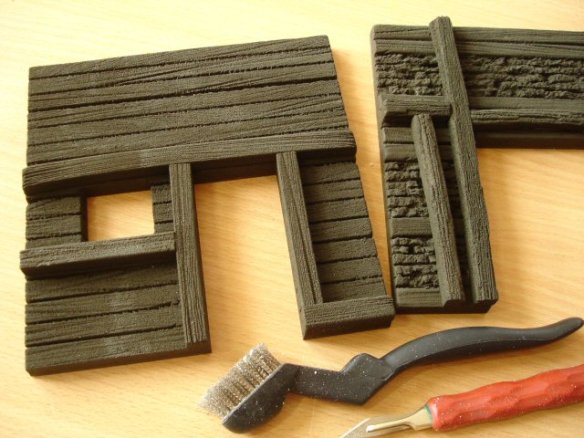 Kapa-line foam is not only very impressionable, it will hold that impression. Anything that’s strong enough to press in will create an effect. Here for example I’ve used decorative jewellery ‘findings’ and dental modelling tools to create different patterns.

The thick (10mm) version of Kapa-line foam can also be ideal for building up whole structures, especially if all paper is removed. For the concrete structures in progress below I made the thicker bits by gluing 2 layers together and then breaking down with wire brush and scalpel. All joins were glued using superglue, though this may need a couple of tries because thin superglue will soak into the surface too quickly. If Paverpol (mixed with acrylic or dry pigment to achieve the right colour) is used as a basecoat the surface becomes a lot tougher. These have been given an additional dry brushing in a lighter green/grey but still need the stains and ‘blooms’ of old concrete added.

When layering colours it’s important to keep a record of which, including the order, so that one can repeat the effect if successful. There may be as many as 7 different colours needed to simulate brickwork convincingly.

Where to get it in the UK and abroad

It is unfortunate that Kapa-line foamboard is a relatively rare find in the regular art/craft shops in the UK .. but it is at least available from the leading model-making specialist 4D modelshop  and a number of other suppliers online. For a list of sources in the UK and a comparison of current prices see my page Updated sources/prices of specific materials which you will find in the Suppliers section.

Kapa-line is one of a number of lightweight foamboards (all prefixed by the word ‘Kapa’) characterized by a polyurethane foam core, manufactured by the German firm 3A Composites. After a lengthy search I have to confirm that it is not available in the US, in fact hardly anywhere outside Europe with the exception of Singapore, and one supplier in Australia.

The only solution if you live in the US is to use another product with similar properties .. but so far I haven’t heard of any possible candidates. The most likely would be another foamboard with a polyurethane core as opposed to polystyrene. The polystyrene layer in regular white foamboard is too insubstantial .. just not enough to hold impressions well, too weak to carve or sand and incompatible with any solvent glue. I’m assuming that regular, cheaper foamboard in the US is similar. I’ve had some success with certain types of black foamboard here because the dyed foam has a slightly better, denser consistency and the paper detaches more easily, but it is still no match for Kapa-line.

Finding out whether a brand of foamboard has a polyurethane core as opposed to polystyrene may not be so easy .. the shop assistants are unlikely to know. Instead you have to go by whatever product information is on the website, or you have to phone the manufacturer. If a foamboard is advertised as having superior strength, resistance to warping or heat, compatibility with solvent glues and sprays, or that the foam is denser and cuts more cleanly .. it’s very likely to be polyurethane-core.

‘Balsa Foam’ was suggested as a possible alternative, but having looked at the information I could find, I very much doubt it. In the first place it is obscenely expensive for the simple material it is and it only comes in block form. It looks harder, probably more brittle, which may make it more suitable for sharp carving but unsuitable for the purposes shown here.

If anything styrofoam (by which I mean the proper, blue ‘Styrofoam’ trademarked by Dow Chemicals) would be a better and hopefully cheaper option. It offers much more than foamboard polystyrene. See the end of my article Shaping styrofoam under ‘shaping’ in the Materials section for further information on obtaining styrofoam.

Alternatives to Kapa-line foamboard in the UK

I only discovered recently that there is another manufacturer of polyurethane-core foamboard which could have similar properties, but neither this type is widespread unfortunately. It is quite a bit cheaper though .. at least for the 3-5mm. London Graphic Centre produce their own brand called Premier Polyboard available from their London shop and online. Just like Kapa-line it comes in 3.5mm, 5mm and 10mm thicknesses but unlike Kapa-line the sheet size is the more standard A1 and there are also options down to A3 (except for the 10mm). The cost of an A1 sheet (May 2017) is £7.99 for 5mm thickness and £5.60 for 3.5mm thickness, inclusive of VAT. There used to be a 10mm thickness but I can no longer find this on the shop website.

I did some tests on small pieces of the 5mm. In short, I was very impressed with how the foam surface compared with Kapa-line. It is different though .. in some ways not as good but in other ways better! The paper covering is tougher (on one side also a little thicker than the other) and it’s a little harder to pull off the foam .. but it does separate cleanly. The foam itself is pure white rather than cream and is denser/tougher than Kapa-line and also more flexible, ‘springy’. I tried a sample of brickwork using my usual method, as above, and there was really no adverse difference except that the Polyboard needed a little more force to inscribe it or texture it with the wire brush. The main difference discovered when I sanded was that it has a little more resistance .. it doesn’t crumble so readily, it shreds more. So sanding is not quite as effortless, but on the other hand it was possible to get an even smoother finish when fine-sanding. When testing the way it took impressions the difference became even more marked .. it’s more like pressing into marshmallow! Kapa-line fractures if pressed to deeply, but this didn’t. There was a little ‘spring-back’ but actually not enough to matter. I haven’t tested painting with acrylics yet .. but I know that all rigid foams, whether polyurethane or polystyrene, will take acrylic well. I can’t speak yet for working with the other thicknesses .. it happens sometimes that the composition of rigid foams varies according to the thickness.