This location would normally be easily accessed along the Thames Path but at the present time (January 2017) there is a signposted detour which, coming from the Greenwich direction, begins just after Greenwich Power Station and circumvents a very large area of new building to re-join the Path upstream in the Morden Wharf area. But you can double-back to reach Enderby’s Wharf at that point .. at least, although there was a rather weather-bleached notice attached to a post there .. the path was not blocked off. 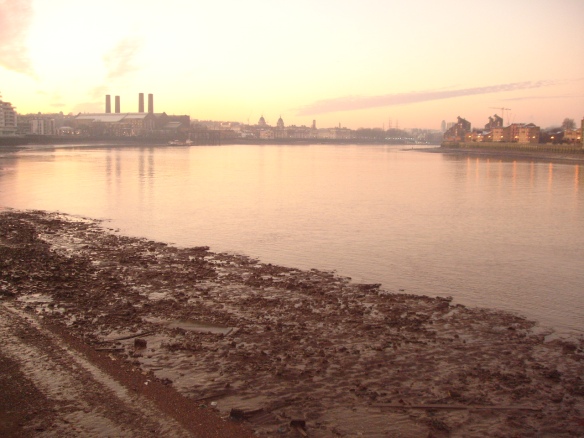 Above a January dawn, looking upstream towards Greenwich Power Station. Below looking downstream and in the distance .. the vision of London that Dick Whittington must have been given and misunderstood .. Canary Wharf dipped in gold! 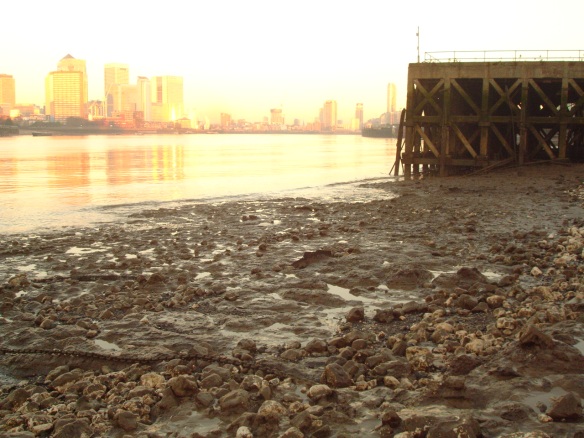 The steps have no railing so extra care needs to be taken, especially on the wooden section. The terrain can be rocky in places ( large flints, industrial building debris, lorry tyres ) and includes a fair amount of ‘spiky’ pieces of rusting metal. The stretch is wide and open here so it’s easy to keep an eye on the approaching tide.

Unfortunately the ‘ferry’ was never a public one .. it was used in ferrying drums of cable to ships moored in the river

The Enderby family were in the whaling trade when they acquired the site in the early 19th century. They built a ‘rope walk’ there, and Enderby House in the 1830s, but by the 1850s the site had been taken over by the company Glass Elliott who were developing new techniques of marine cable making, and the site has been home to submarine communications cables ever since, up to the present Alcatel.

Morden Wharf nearby was named after Morden College, the Blackheath charity founded in the 16th century and apparently they still own much of the area here.

There had been ‘copperas’ works in this area, as in other parts of the Thames estuary, since medieval times. ‘Copperas stones’ (pyrites) could be found on the beaches, then steeped in water to eventually produce a liquor which could be used to make dyes or mordents.

From the late 17th to late 18th century there was a government gunpowder depot nearby, where gunpowder was also tested. I’m sure the makers of the recent BBC period drama ‘Taboo’ were inspired by the atmosphere and associations of this part of the peninsula

There’s normally ‘old industrial’ debris lying around whichever part of the Thames Foreshore you go to but from Greenwich Power Station onwards downstream it all gets much more noticeable. Generally the beach-stones get more ‘bad-ass’ .. bigger, blacker and more jagged!

I think it’s worth going here for the bleak atmosphere .. a kind of no-man’s land detachment. London could be a thousand miles away. But it’s not worth going if you’re only after ‘things’ .. I’ve been here twice and I found practically nothing. There’s a lot of old ‘historical’ mud though .. so, you never know! 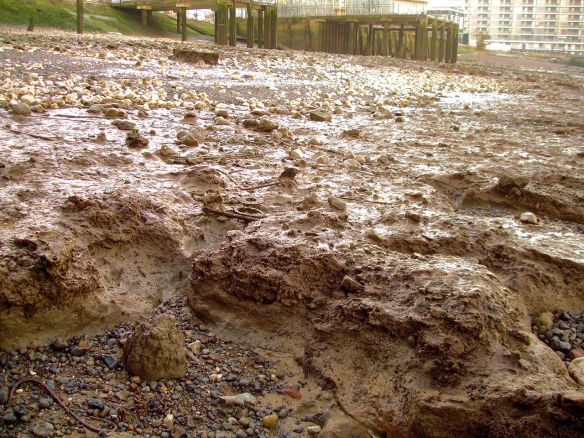 Most of the shingle in the area can be found against the river-wall underneath Morden Wharf.

Large and oddly shaped flints seem to sprout from the mudflats.

Directly downstream from Enderby’s the foreshore landscape gets somewhat greener .. even if it is just algae. Below the transforming remains of a ‘dolphin’, a structure on which boats could be moored.