Here is a demonstration of a method I use when building realistic architectural models. It is a time-saving way of building a stable, solid wall whenever one needs a ‘real’ wall thickness including both interior and exterior surfaces. On the one side standard cardboard serves for the interior while on the other side polyurethane foam can be more easily worked-into to create brick or stone effects.

Part 1 describes the basic build .. to be honest rather plain to read, a functional stage that has to be got through before anything more interesting can happen.

I’ve featured this as a making exercise for some years in my model-making courses, though it’s updated each year. It serves as a good summary and practise in many fundamentals of model-making. Here the scale 1:25 is used and the wall includes a doorway and a window. In my own practice I use foamed Pvc sheet in place of cardboard (because it is more durable, can be carved/sanded and can be painted without warping) but I’ve found that the more familiar, available cardboard is better suited to an introductory teaching exercise. Please note if you are following the steps here but using Pvc instead and therefore gluing with superglue, you will need a metal guiding block rather than wood, otherwise the superglue will not detach from it.

First the ‘template’, that is, the interior cardboard face of the wall is marked up. I call this the template because everything else will be added onto it and the shape will become a guide for sanding the soft foam layer. As an aid to marking out door and window openings I normally use a small try square especially for repeated verticals.

I also normally use ..and recommend.. a surgical scalpel, even when cutting quite thick materials. The blades are sharper and thinner, resulting in less resistance. Probably a whole book could be written about how to cut a line properly, whichever material is being cut. It’s usually the first factor which determines whether someone takes to model-making or wants to leave it. The objective is to cut confidently, cleanly and in the right place. The key to this lies in concentration, not cutting in one go and keeping the knife blade against the metal ruler. The ruler has to be metal (preferably steel, because even aluminium is too soft). I usually recommend practising passing the blade along the metal edge at least a few times first without cutting just to establish a familiarly with what it should feel like when the blade stays connected to the metal. Whatever the material, even if it is easy to cut through, the first proper pass with the knife should just score the surface providing a definite guiding groove for the next pass for which one can press down more firmly. Nothing is going ‘wrong’ if it takes more than a few passes to cut through even a relatively soft material, provided of course that they’re all along the same line. There is a great deal more I could say about cutting, but this isn’t the moment for a dissertation on the subject .. it’s best to move on!

The next task, above, is to cut so-called ‘returns’ building a realistic wall edge thickness around door and window openings. Because in reality both window and door frames are commonly positioned somewhere within the overall wall thickness (i.e. not just slapped onto either the outside or the inside wall surface) the strips I’ve cut here represent roughly half of the eventual wall thickness in the model. Note also that the cut-out pieces for window and door can be used for these strips because at least the verticals will be exactly the right measurements. Often windows are actually set back more from the interior wall face, giving a definite ‘window sill’ but that will depend on the look or the period required.

As an aid to gluing these strips straight and precisely along the opening edge I am using what I call a guiding block or assembly block. This can be any piece of wood or metal which has at least two flat faces at a true right angle to each other. The piece of wood framing profile I’m using here doubles as a right-angle sander later. The block is positioned against the edge which will take the strip and kept firmly there while the strip is glued in place. The Pva wood-glue I’m using will allow some repositioning for a short while so that strip can be adjusted and pressed up against the block. If one is suitably sparing with the Pva the strip shouldn’t stick to the block. 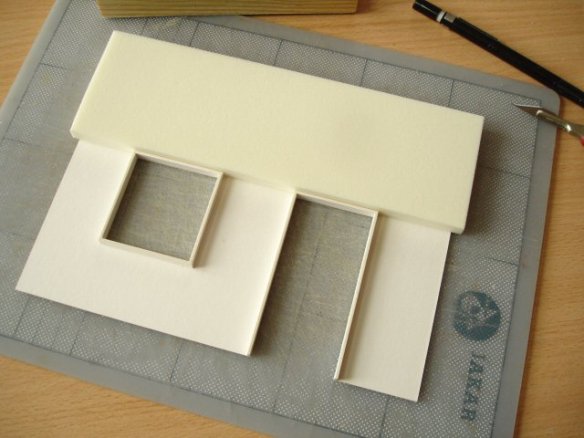 In the photo above the return strips are done and now the exterior side of the wall can be built up. This needs to be pieced together in strips of sheet foam, working round the window and door openings. Doing it this way makes it easier to keep all edges straight and perpendicular. It would certainly be simpler to stick a complete layer of foam over the whole wall template (before putting the returns on) and cut/sand round the outline. But it’s not as easy to achieve a nice, straight, right-angled edge inside the window and door openings this way. The sheet foam I’m using here is actually the interior layer of a type of foamboard called Kapa-line. Different to standard foamboard, which has polystyrene foam as its core, Kapa-line has a layer of polyurethane foam which is denser, stronger and easily shaped.

I’ve made the guiding block double up as a sander, gluing sandpaper to one face (nicely, this also helps it to grip when it is turned over as a guiding block). The edges of the foam pieces can be very easily sanded straight and true. I’ve stuck the pieces to the carboard with double-sided tape. Just a few strips are needed (not complete coverage) and the bond is fairly permanent. 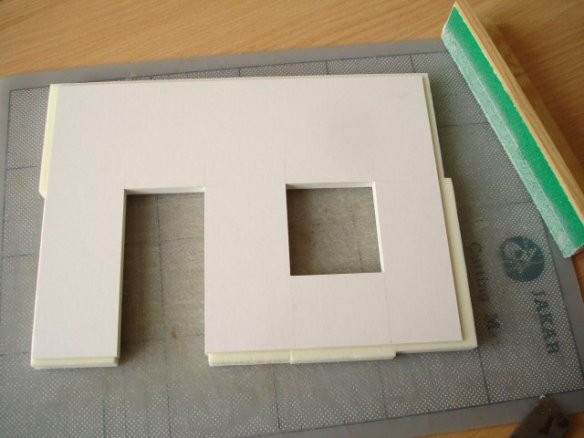 Once the whole area is covered it can be turned over. I’ve overlapped the foam on the outside edge and this excess can be trimmed with the scalpel and sanded straight with the angle sander. The initial cardboard template shape, although soft, is resilient enough to act as a ‘stop’ when sanding the foam down to the edge. 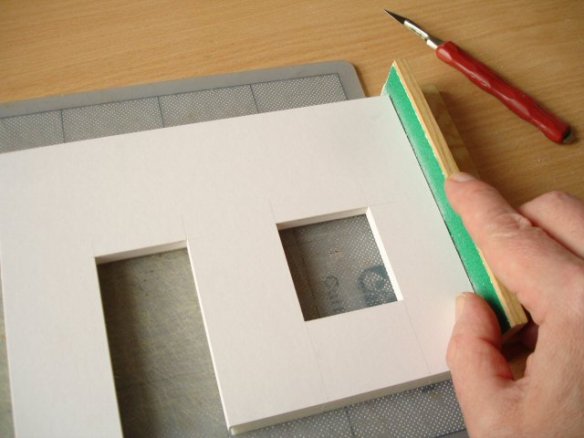 This completes the first stage. What we have is a stable, lightweight construction with a smooth surface on one side ready to be decorated with interior wall details, and a ‘workable’ surface on the other which can be easily incised, carved or embossed. In addition the strip returns framing the window and door provide good locators for gluing window and door structures.