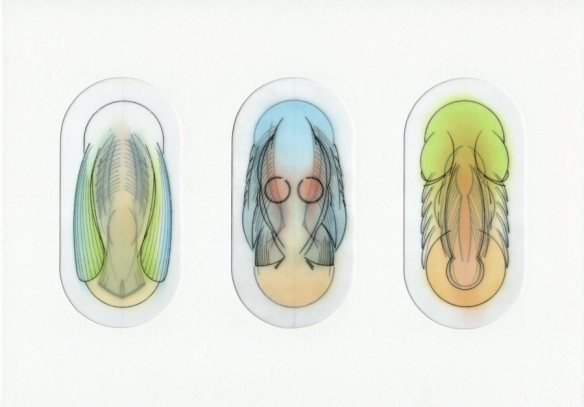 At the beginning of 2012 I decided to revisit a technique I’d experimented with back in 1997, creating ‘biomorphic’ forms by overlaying symmetrical designs drawn with Rotring drafting pens on transparent paper. At that earlier time I was content to leave them monochrome but the second time around I tinted the layers first by shading parts in colouring pencils then rubbing the pencil pigment into the paper using tissue and white spirit. In the process the colour tint is both intensified and evened out, but once it has dried it can also be subdued (or even removed) working carefully with a soft eraser. Overall this gives a very satisfying, near-perfect control over the effects achievable. But originally I was as much concerned with accident as control, writing at the time:

“The term ‘symmetrical biomorphs’ is adapted from Richard Dawkins. I have made use of a combination of determinism and opportunism to dictate the forms and the methods of creation are meant to reflect upon the subject matter of evolution and divergence. A variety of symmetrical pen drawings of roughly equal size were made on translucent paper. These were then layered over each other, partly by chance but mainly by design choice, creating hybrid forms and suggesting evolutionary variations. There were many combinations which just didn’t ‘work’ for me. The theme of natural selection is here parodied by the ‘survival of the most aesthetically pleasing’.”