Here is a full, step-by-step account of making a simple twisted wire armature suitable for 1:25 scale figures. I’ve been meaning to put this together for some time, since long before WordPress, because in my book I suggest a more involved method soldering brass and there was a need for an easier alternative. A good armature is not merely the support for a soft material which would otherwise lose its shape; it should also provide guidance on where to model, in the way that a version of the human skeleton would when modelling on a larger scale. For this reason I’ve found it valuable to define torso and pelvis mass by adding thin cardboard pieces.

I also felt that I definitely needed to choose a wire that was easy for anyone to find again and, hopefully, always available. It’s not enough to say ‘use a very thin wire’ .. because the right kind of thin wire isn’t easy to find! Luckily I’ve found the perfect one for this purpose, a thin plastic-coated garden wire from B&Q called ‘B&Q Value Plant Twist Tie’ costing £1.98 for a 50metre spool. An almost identical kind of wire and spool can be found sometimes in £shops. The whole armature is made from one continuous length of wire, doubled up and twisted fairly tightly together. Although the plastic ribbon adds to the bulk, you will see from the photo below that it compresses well when twisted. If twisted firmly and evenly the final thickness is only a little more than 1mm, representing 3cm at 1:25 scale. What’s more, the twisted surface gives a much better key for modelling material than smooth wire alone. This form of coated wire is also very strong (although it doesn’t have to be so much for this purpose). For example I’ve been testing it as a possible alternative to thicker aluminium wire for animation puppets and at the last marathon ‘bending session’ I reached 100 times back and forth on a fairly fixed point until I gave up .. it seemed completely unaffected! 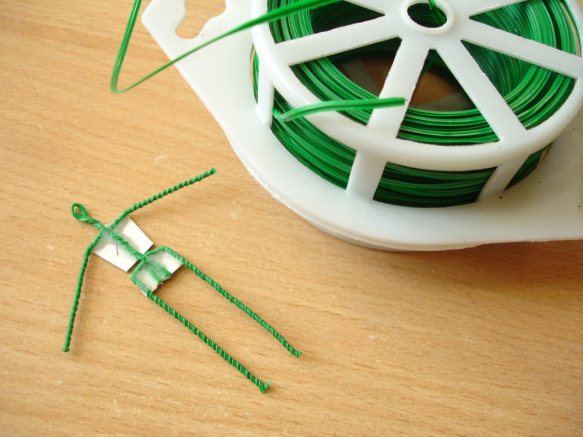 Here below are the scaled templates I’ve drawn up, used as guides throughout the making process. The first is for a 175-180cm male, the second for a 160-165cm female. I’ve uploaded them at proper size (right-click and save) so they should print out at the right scale but if not they are available to download (along with some other modelling reference sheets) on an older resource site of mine:

These template drawings need a bit of explanation. The proportions are based on an ‘idealised average’, if that makes sense, i.e. male a little taller and with broader shoulders than real average and female a little more shapely. The stick figures include hands and feet, just so that it’s clear where these are .. but I usually recommend snipping the wires for arms and legs just halfway into the hand or foot symbol. That is explained below. The torso and pelvis ‘plates’ are indicated by the lighter outlines. Just about any thin (i.e. up to 1mm) strong card can be used, or even thin wood, but not plastic because this will distort with the heat of baking if Super Sculpey is to be used. The drawings also indicate where elbow and knee joints are likely to come, as reference for later modelling. The ‘high kicking’ legs drawn with a dashed line are just there to be able to measure the full length that the leg wires should be outstretched, before they’re glued to the sides of the pelvis plate. 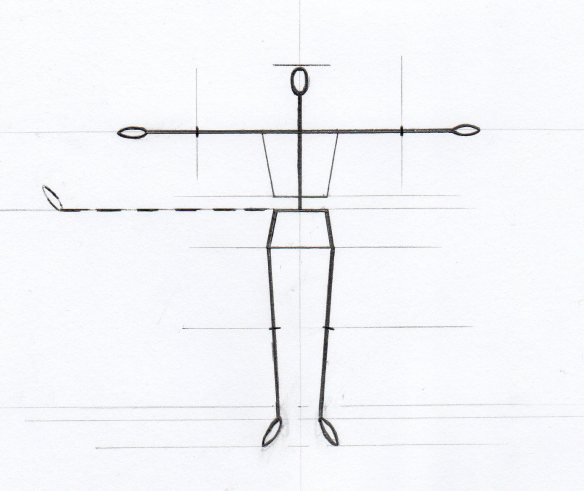 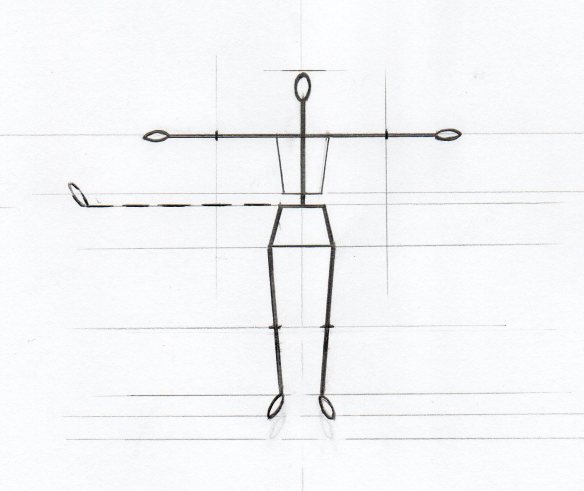 A 70cm length of wire is needed for a 1:25 scale figure, allowing for some extra in case of mistakes. The wire needs to be folded to find the mid-point and the two strands twisted together from there forming a little loop for the head. The neck is then twisted down to the shoulder line. The head-loop should be kept small, certainly no bigger than the size indicated on the drawing. One problem with achieving realistic figures in this small scale is that the heads invariably end up too big, usually too round .. what I call the ‘Playmobil syndrome’ .. so it’s best to guard against this from the beginning. Although this wire is easy enough to twist using just the fingers it may help to use a cocktail stick as a lever, shown below. 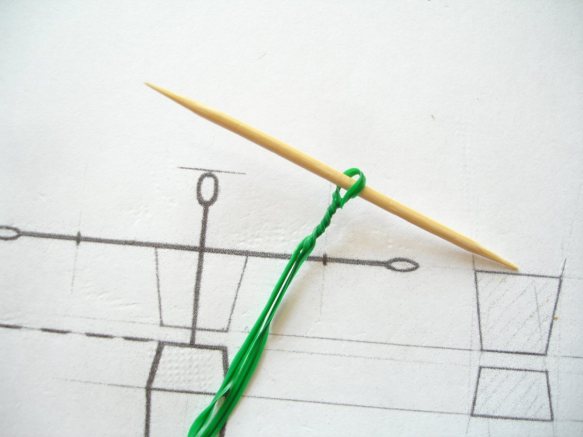 The length of the ‘neck’ should then be checked against the drawing (below I’ve placed it a little underneath just so that you can see the drawing) and the two strands of wire splayed out. 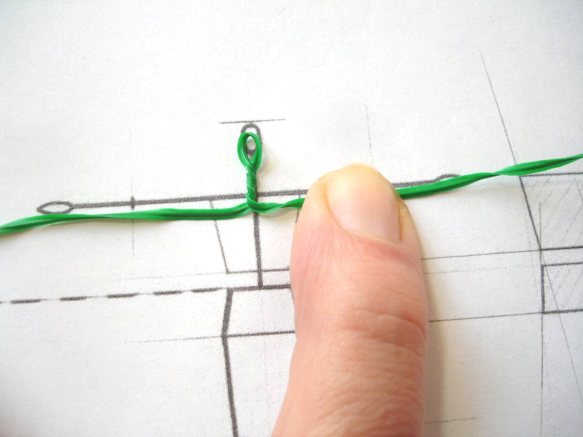 Each strand will first form an arm, and this is done by making a loop which returns to the centre. To be safe make the loop extend about 1.5cm longer than the drawn arm, because the wire contracts when twisted. 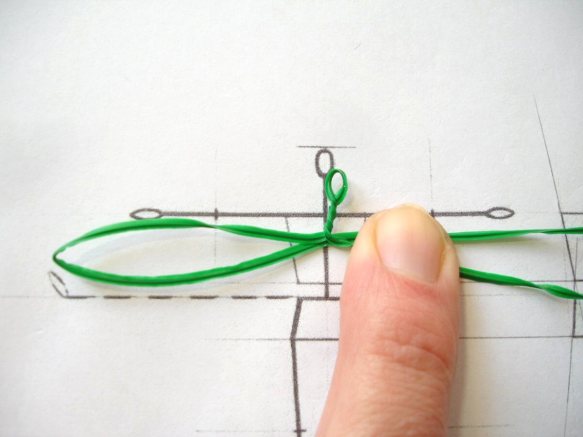 Hold the two strands of wire firmly together at the bottom of the ‘neck’ and start twisting from there. Twisting is much easier, and more regular, if after a few twists you open out the loop to use as a lever. 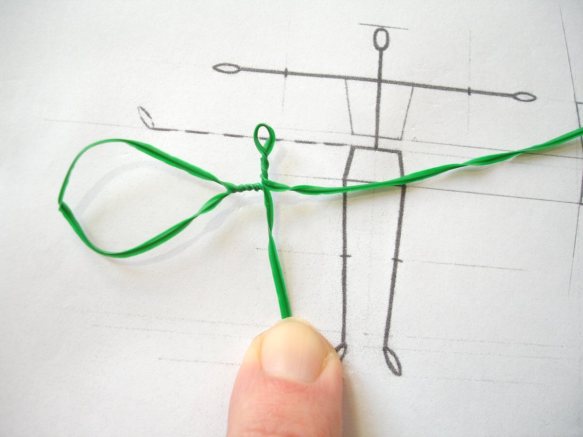 Keep going until the loop becomes a bit too small to manage with the fingers and then check against the drawing. The arm needs to be long enough to extend just halfway into the hand shape, not right to the fingertips. 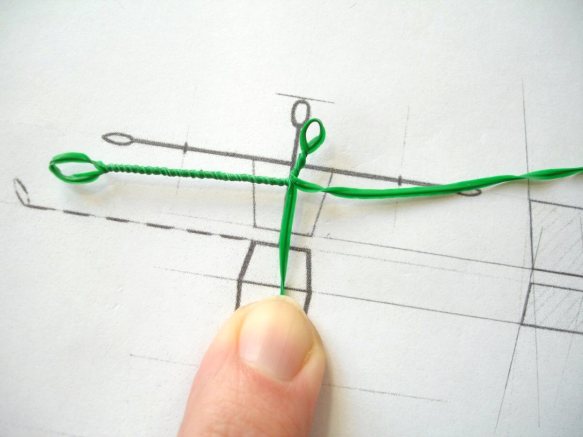 At this scale hands are so slight and the wire is too thick for them. This way there’s just enough wire to attach a small ‘flipper’ shape to it, to suggest a hand. 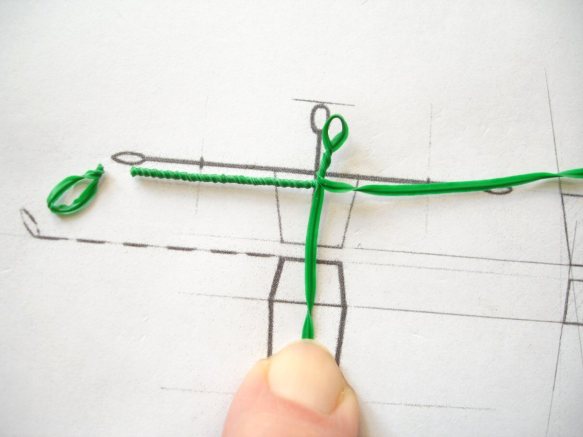 The wire can be cut with an old pair of scissors, but it’s much easier and more accurate to use proper wire snippers below. Actually they’re known as ‘wire nippers’, just for cutting wire, with a head like a puffin. £shops don’t tend to have them but the cheapest one’s I’ve found in London are from the Danish chain ‘Tiger’, small ones for £2 usually found in the crafts section. 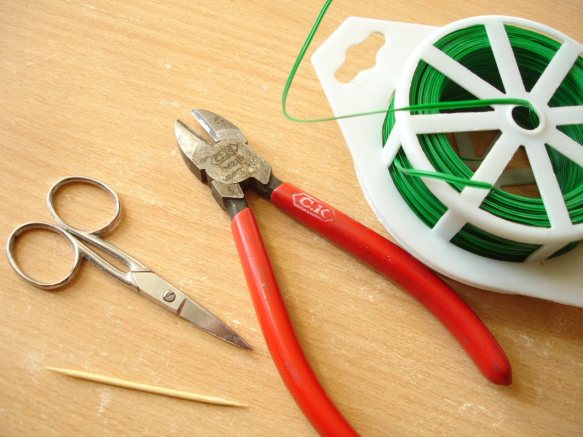 Below, of course next comes the other arm done in exactly the same way. But make sure that you do this with the right strand of wire remaining. There are two .. take the longer one! It may seem obvious to some, but anything can happen during a lapse in concentration! 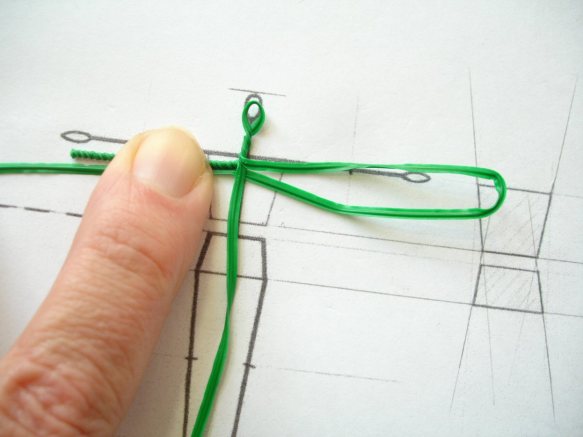 But here it’s also important to try to make the twist start as level as possible with the first arm. 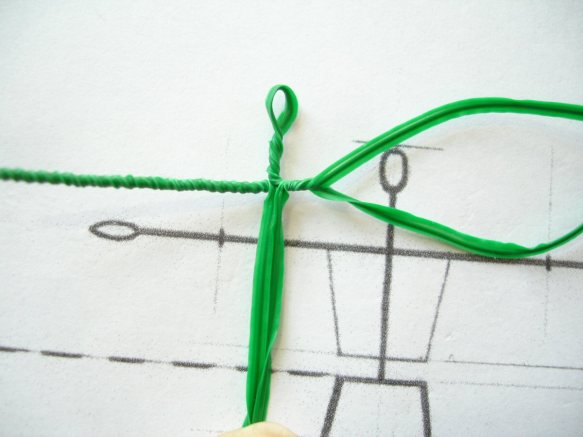 Next, twist the two remaining strands together to form the spine as far down as the top of the pelvis shape. 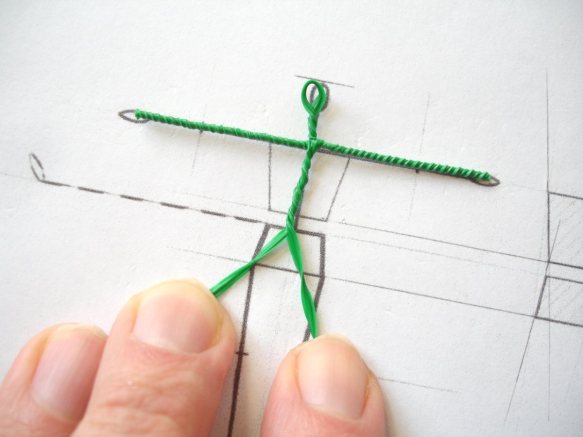 This is where the armature starts becoming something more identifiable .. more believable. Use the drawing as a shape template to cut thin pieces of card for the torso and pelvis (see the paragraph at top, just above the template drawings). Tack the torso piece to the drawing using UHU or double-sided tape and position the wire figure over it, pressing down so that the wire lies as flat as possible on the cardboard. 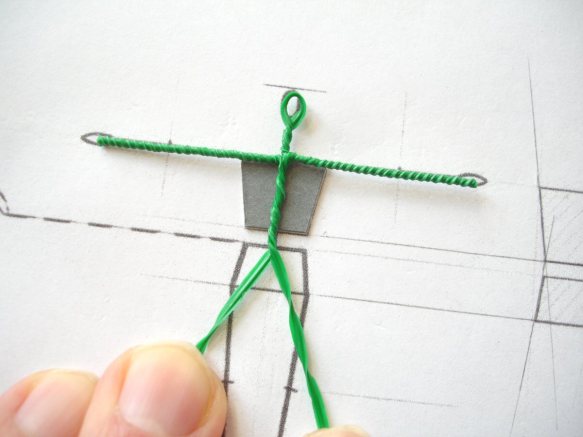 Below I’m fixing the torso in place with superglue, adding baking soda (bicarbonate of soda) to accelerate and thicken the glue. It’s the quickest and strongest method. Superglue alone can’t be made to stick enough to this kind of plastic, but adding the powder seems to ‘cement’ it solidly. 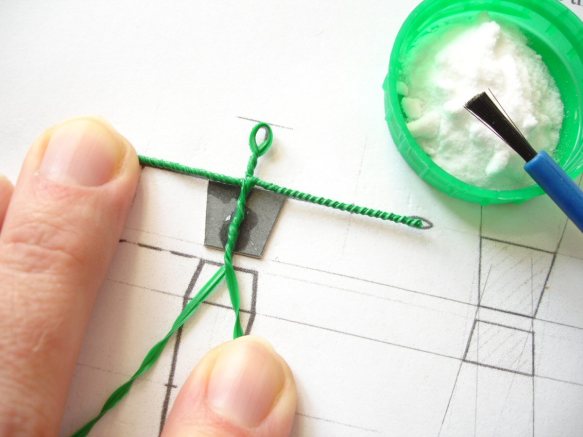 Above and below, I’ve dripped thin superglue over the wire pieces, enough to run onto the cardboard, then used a plastic brush loaded with the baking soda to drop it onto the glue. It sets almost immediately into a rock-hard mass, filling gaps between the wires and the cardboard. 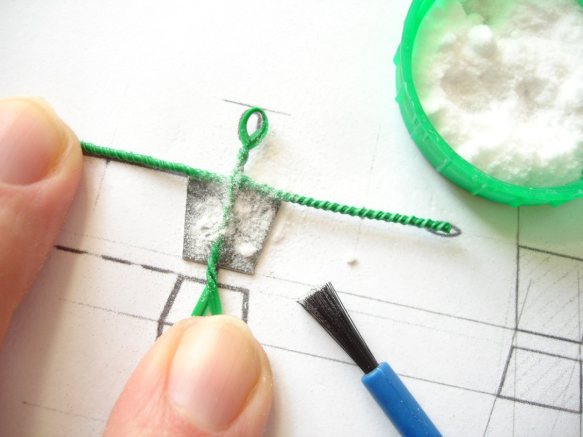 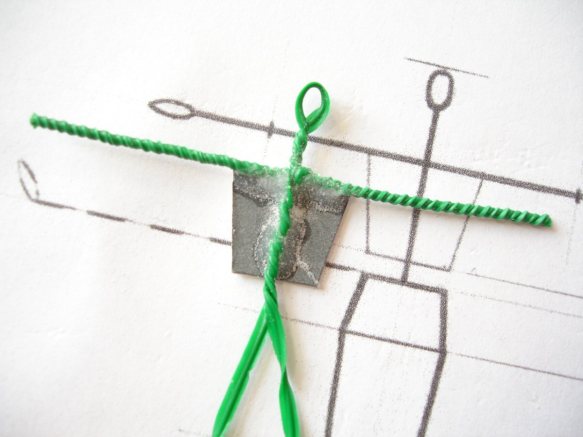 Other things could be used for this such as 2-part epoxy glue, which can be fast, but this is instant and the rough surface is a good key for any modelling clay. Using baking soda as an accelerator and gap-filler with superglue has been known about for some time but as yet I’ve found no complete explanation as to why it works so well. I’ve read that superglue, apart from needing a small amount of moisture to set, also needs neutral ph conditions (i.e. not too acidic) and since baking soda is often used to create just that (i.e. used as an antacid, for example) this may have something to do with it. It may also just be physical rather than chemical. When superglue is filled with particles of a certain type the chain molecules that form as it sets don’t have so far to go perhaps, so setting is quicker?

But getting back to this, the next stage is to repeat the process for the legs … 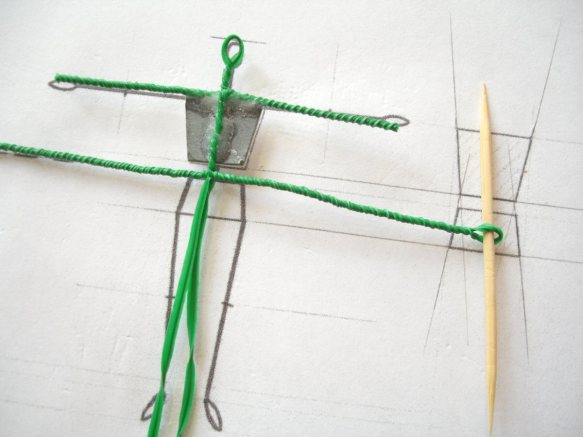 … and cement them to the pelvis piece in the same way. The surplus strands of wire can be cut off after gluing. 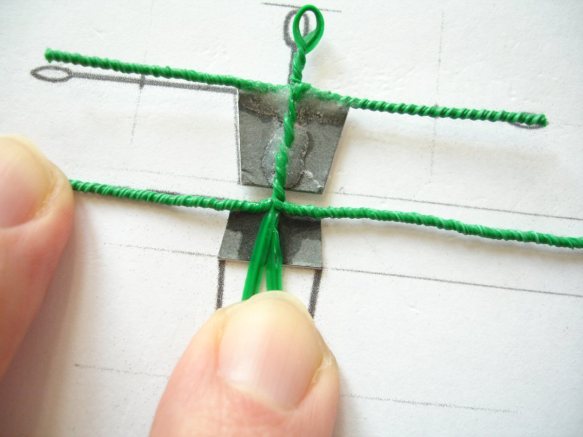 The legs need to be secured along the top of the pelvis piece first, then bent round the outside edge and glued in place. That’s another great advantage of superglue, to be able to glue in small instalments! 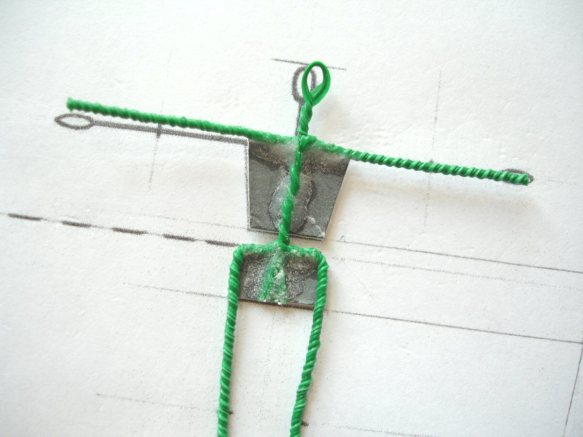 The armature is now ready to be modelled upon! My technique of modelling, whether I’m using Super Sculpey ( a polymer clay which needs heat to harden) or Milliput ( a 2-part epoxy putty which cures on it’s own), is to build up very slight body masses first, just enough to make those parts of the wire inflexible but keeping the joints free so that the figure can still be repositioned. It’s easier to work on the general shapes of these body masses, and to keep the symmetry above all, while the figure is still a ‘spreadeagle’.

But the modelling is a separate chapter, which will follow at some point …