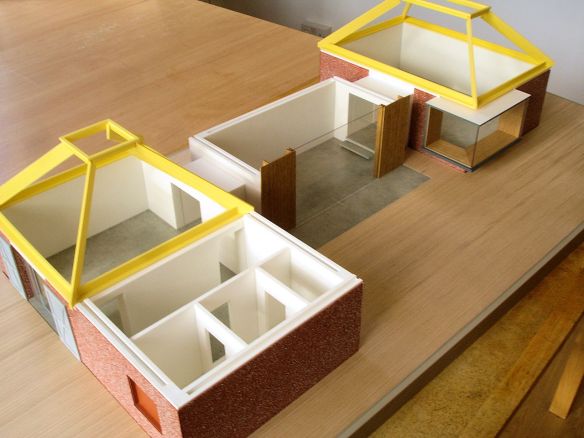 I was asked to make a model of gallery rooms newly added to a private house in Hampshire, and have been working on this part-time for the last few months. The focus was on the interiors, since the idea was that the owners could use the model to explore different arrangements of the contents, but it was agreed that the model could also have an aesthetic presence of its own .. as a sculptural object in itself .. so I took the freedom to stylize aspects of the exterior and to avoid fussy detail. After initial talks with the friends who’d commissioned it the model developed its ‘plaything’ nature .. somewhere between dollshouse and construction kit .. as it progressed. From the beginning the plan was that there would be detachable sections, making it possible to peer into parts of rooms, but that these ‘building blocks’ could be quickly and cleanly reassembled again. This suggested a baseboard with cavities into which room sections could be slotted into place .. further adding the qualities of ‘jigsaw’ and ‘puzzle’ to the aspect of play.

We wanted the roof structures to be represented, mainly to illustrate how the interiors are crowned by these light-receiving cones. But I only wanted to ‘outline’ them as it were, and they needed to be detachable. Giving them any suggestion of their external nature would have made them too heavy-looking, so I took advantage of their separateness to make them  ’emblems’ in yellow Palight. 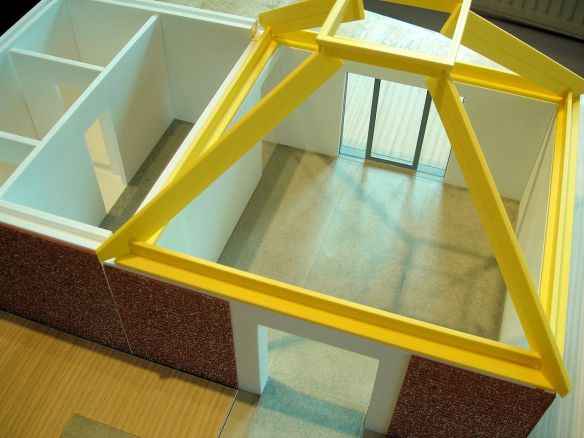 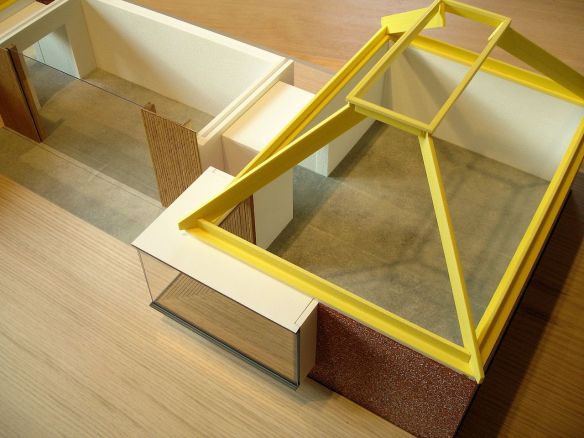 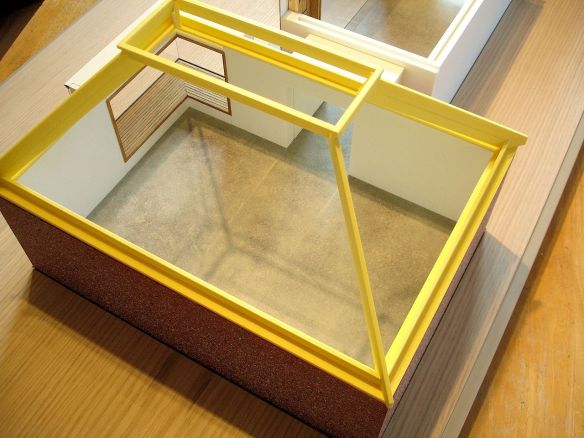 Once again I wanted to use my favourite foamed PVC for most of the build, because it is one of the most manageable and versatile materials I know! Using this would also mean that the individual ‘room blocks’ would not become too heavy while still being structurally very solid. At the chosen scale of 1:25 the main walls came to roughly 15mm thick in the model, while the interior walls could be represented with 5mm. I had quite a large stock of 5mm, but I chose to build each section of thick wall as a ‘sandwich’ i.e. solid 5mm PVC both sides, with a 5mm thick framework in between. This was partly to reduce the weight ( and therefore the stress on the boxes ) a little more, but also because I wanted to build in a continuous groove along the tops of the walls to slot the ceilings into. In retrospect I wouldn’t do it this way again if I could help it .. it was an awful amount of cutting, sanding, aligning and gluing! 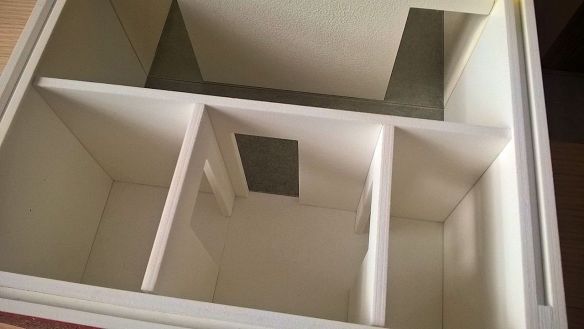 Here in the UK Palram’s ‘Palight’ brand foamed PVC is available in white or a small selection of colours, and comes in a few different thicknesses. But of the white only the 1mm thickness is actually Palight. In the thicknesses from 2mm to 10mm ( there used to be thicker, but no longer it seems) the material is Palfoam. This is important to know, and to check when ordering, because Palfoam is softer. This makes it even easier to cut ( with a scalpel for example, as I do, and especially if one cuts along the extrusion grain i.e. along the less bendy direction ) and it glues together even stronger because the cut edges are more porous. But the surface of Palfoam is much more susceptible to scratching, so something needs to be done about it if it’s being used for a model that’s going to be handled. 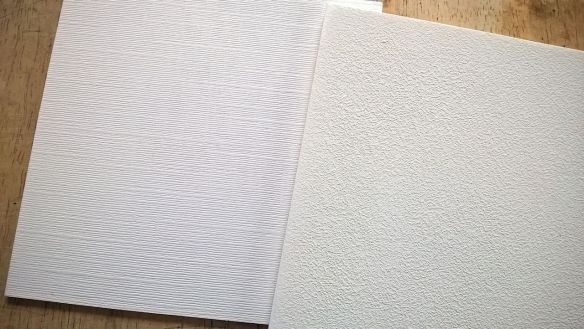 I knew that I was going to clad the outsides anyway with whatever I came up with for the brickwork effect, so my first task was to find a covering which would be suitable for the interior walls, which in reality were just white-painted plasterboard. Apart from the practical durability aspect I wasn’t happy with the idea of just white PVC walls anyway .. it’s the most uninteresting, lifeless form of white! One possibility was cladding the interior with Daler Rowney ‘Georgian’ oil painting paper ( on the left above ) which is quite a tough 250gsm, primer-coated and ‘linen’ textured paper. This is available as pads or sheets. The other idea was evenly stippling Polycell’s Fine Surface Polyfilla directly onto the PVC ( shown on the right ). I’ve textured PVC this way before  so I know that it stays put and resists scratching better than the plastic alone. It’s tricky at times to maintain an even quality of stipple, and the oil painting paper was the easier and quicker of the two to do, but I was worried that the paper could scuffing at the edges after repeated handling. Fine Surface Polyfilla is also a more sympathetic, slightly warmer white, so I chose this for the wall treatment. 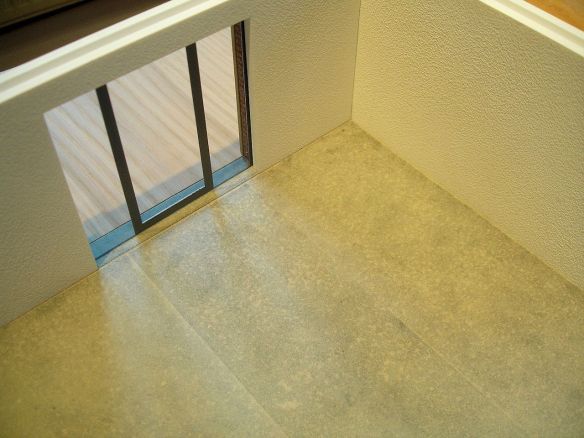 The most important aspect of the interior, the part which needed to look ‘convincing’ above all else, was the polished concrete floor. Especially so, since floors assume greater significance in models than in real life, because we’re mostly looking straight down on them. That usually can’t be helped, but it’s one of the reasons why we chose to make the model in removable parts, making it possible to get more of the ground level perspective. 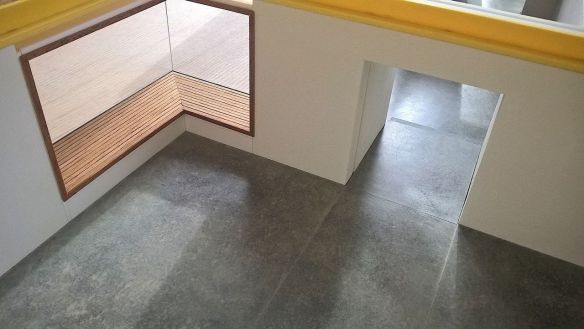 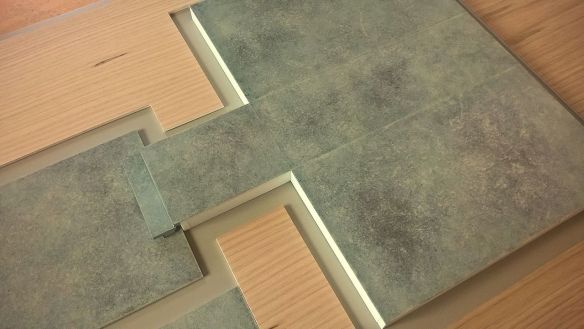 I was originally going  to go with a method I’d tried before, using matt photo prints of actual concrete and achieving the polished look by spraymounting clear acetate on top. I’ve used this technique for very convincing marble or polished wood, easy to play around with because the parts can be ‘tweaked’ separately instead of having to achieve it all-at-once, and satisfying to look at because the surface effects ‘come from within’ rather than lying opaquely on top. Incidentally, it’s interesting to observe from the last three photos how .. even in simulations! .. the particular warm greenish-grey of concrete can alter quite a bit dependent on the light. I’ve noticed many times in real life how much concrete can change its mood under different lighting. 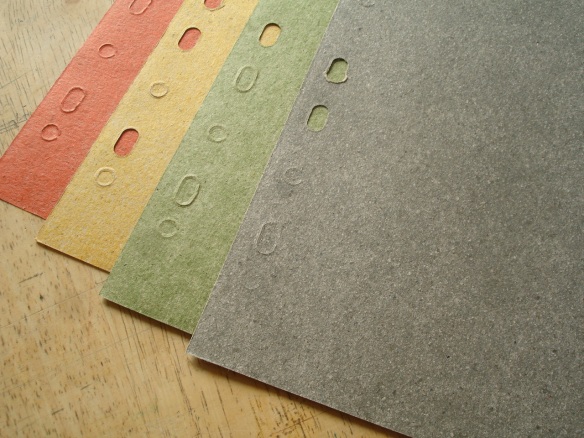 As I was saying, I’d planned to create the concrete with photos but by chance I happened to have a cheap, recycled paper that worked even better as a basis. These (above) were file dividers found in a £shop which I’d kept because their back surface was interesting. The grey ones were a good basis in terms of colour and mottling, a suitable warm greenish-grey, though a little too dark and too even. But I found that if I use a sanding sponge on the paper  I could make it lighter, while giving it a bit of animation. 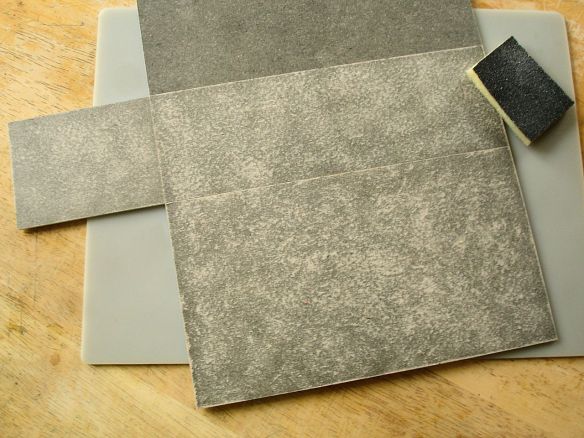 Embossing the back first with a serrated modelling tool created other distinctive patterns in the paper when sanded. I didn’t want this kind of patterning in this case, but it’s an interesting effect. 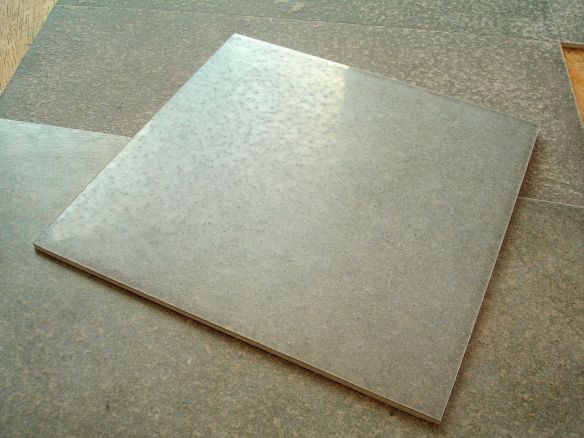 I had to cut the floor pieces out of 2mm Palfoam first, clad these in the paper ( spraymounting down using 3M’s Craft Mount, the strongest ), modify the paper surface by sanding, vacuum the surface to remove any dust .. then I could apply the acetate. This is straightforward ‘transparency film’ designed for printing on, sometimes also called ‘OHP film’ ( for overhead projection ). Hence it’s surface feels slightly rough on one side, because there are micro-deposits of clear priming material to help the ink to fix. It is this side of the acetate that needs to be spraymounted, then laid and firmly rubbed down over the paper. Now the glossy side of the acetate is on top. This is usually too glossy for a polished concrete surface ( though it depends what look you’re going for) so I take some of the gloss away by rubbing either with a kitchen scourer or very fine sanding sponge ( the kind painter/decorators use for matting paintwork ). This will deepen but also slightly lighten the effect. 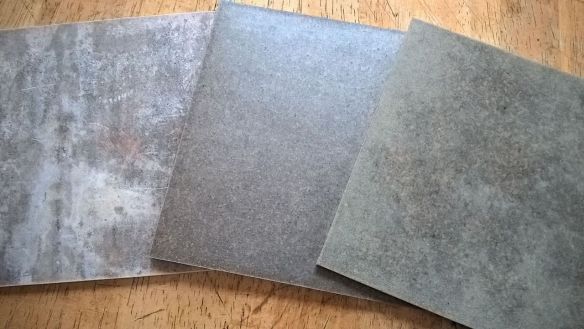 I felt in the end that my polished concrete was still a little too dark and not ‘beige’ enough, so I gave all the pieces a light and mottled dusting with Belton Molotow ‘Stone grey light’ spray paint. Above .. to the left is an example of the photoprint method (which in this case was far too busy and specific); in the middle is the recycled paper/acetate version; and on the right the final adjustment adding a dusting of spraypaint.

In the next part I will be talking about the baseboard, describing my methods for staining woodwork, and a ‘generic’ or stylized treatment for the brickwork.