For another year running I was so thankful that I didn’t miss the single, ever-so-brief chance last Thursday 11th to see New Blades 2015 the annual model makers recruitment fair at the Holborn Studios in London. In actual fact this was amazingly the 23rd year running and this unique event is organised each year by 4D modelshop on behalf of the colleges, featuring the work of graduating students from model making or special effects courses throughout the UK ( go to the end for more info on the colleges and courses ).

I have rather ambivalent feelings towards the terms ‘model’ and even more so ‘model maker’. Personally I cringe inwardly when I’m referred to as a ‘model maker’ because I feel it instantly reduces me to a fraction of what I am or what I’m involved with .. and judging by the quality, depth and variety of much of the work on show at New Blades 2015 I think the graduates deserve to feel the same! But however much I might dislike the term because of how little it’s understood ..seeing the show makes me very proud to be considered a ‘model maker’ too!

I’ve tried to include photos here of the work that most impressed or interested me this year, but I’ve also included work from past years which I felt was indicative of New Blades as a whole. Unfortunately, since there are no catalogues or online records of the exhibits, I was limited in the choice of photos and only had the names of the exhibitors, but no work titles or other info.. 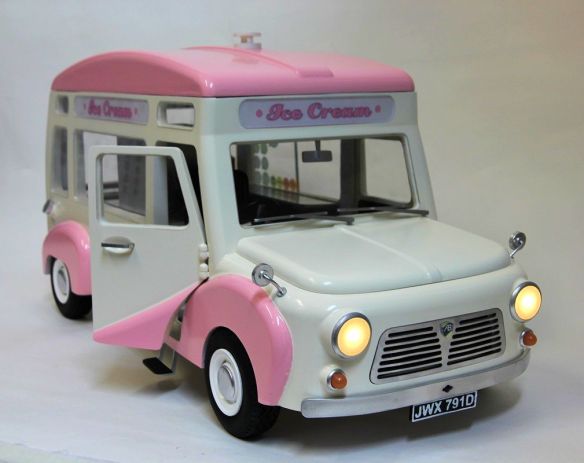 This is not really a ‘review’ of New Blades 2015, just some thoughts on what I saw and on the regular institution the show has become over the years, because I feel that something so special deserves wider attention. The students, their tutors, the colleges and the organisers could do with more feedback, in spite of the show being very well attended during the brief time it was on.

But wider publicity is more for the benefit of the public than the contributors. There is work here that would not be seen anywhere else .. at least not so close and personal. Each year the chance comes along to focus on the type of painstaking, practical work that contributes so much to our media experiences .. if actors are venerated, almost worshipped by some, for igniting our imaginations why not the objects created too? 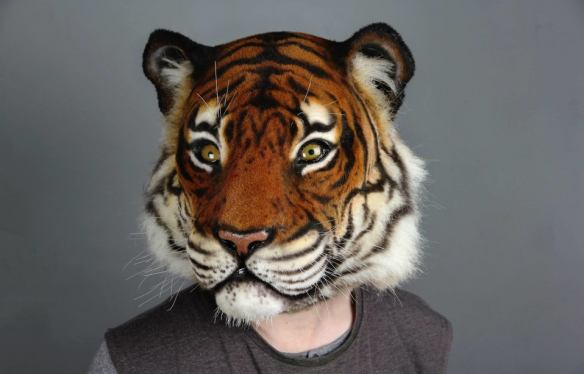 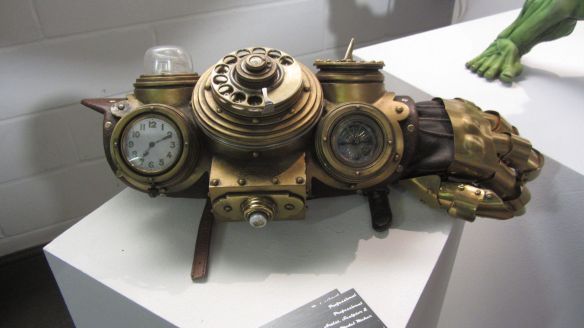 This is a great deal more than a ‘model making’ show .. it is a roller-coaster ride through some of the finest, most entertaining, most inspiring examples of physical making! It is a show about passion, dedication .. and breathtaking skill! At times it’s very difficult to connect the works on view with the young, hopeful people standing next to them during the ‘Industry Night’. The quality of many of the objects suggests more years of experience .. many years of practise and an ‘old school’ attention to detail. What comes across from the show as a whole is that the passion and dedication are so obviously shared by everyone involved with it .. the organisers, the tutors, the industry professionals and the commercial sponsors.

How can this rather diminutive word ‘model’ begin to do justice to the serious quality and vast range of the work produced. In this context the word has to embrace prosthetics, costumes, ‘cosplay’ artifacts, theatre and film props, puppets, animation sets, automatons, animatronics, character portraiture, creature design, architectural models, product design, museum and exhibition displays, sculpture, fine engineering and bespoke furniture. 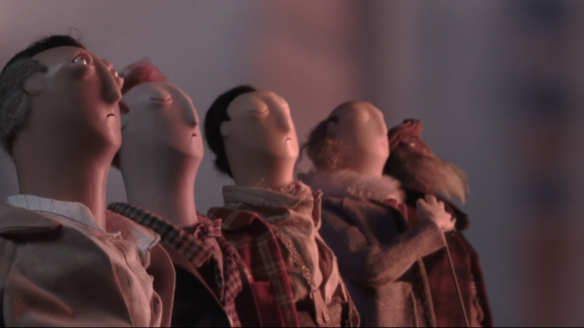 Above still from Stephanie Bolduc’s short film ‘Manoman’ and below work from Alexandra Poulson, both from this year’s show

Below work from Matthew Cooper 2014 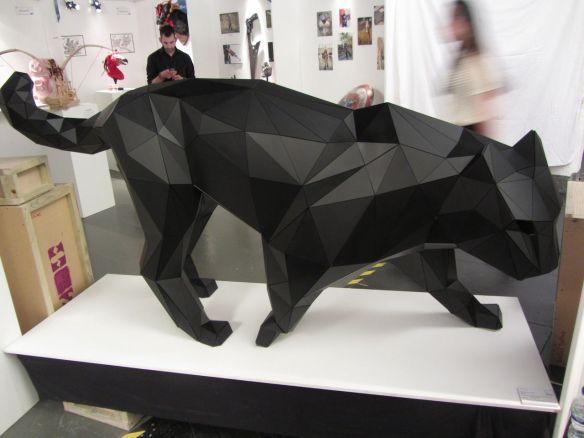 Perhaps the general tag of ‘model’ is not so bad in some respects though .. it is like a little signpost pointing to the ‘hands-on’, the physical and practical. Unlike some Degree shows objects are always centre-stage here, and partly because of that each show is packed with immediate focuses of interest .. but never feels cluttered! 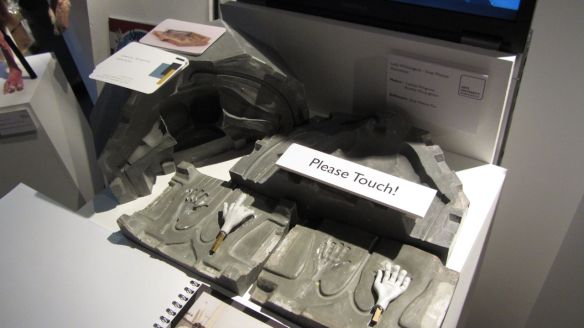 The roller-coaster experience may be a little unkind to the architectural or product models exhibited .. I always feel a bit sorry for them! They need a quiet zone of contemplation. They are often beautifully made, faultless, and they certainly have their devotees amongst the audience .. I would say the same for the custom vehicles .. but they’re not so likely to get the ‘popular wow’ vote.

There are however prizes awarded in a number of categories, including ‘Best Architectural Model’ ( awarded in 2014 to Petre Craciun, above ). We all like being acknowledged ourselves and it’s difficult not to be moved when we witness the acknowledgement of someone we believe deserves it, but I feel that the prize-givings are more just a part of the entertainment. With so much variety, so much choice .. it can never be completely ‘fair’ .. I’d estimate a good 25% of the achievements in New Blades deserve the same accolade each year!

Speaking of choice .. in terms of subjects and treatments I’m guessing that students don’t have a completely free choice as to where or how to focus their efforts. If they want to get work these choices are conditioned by the market and tutors would be failing the students if they didn’t equip them to satisfy it and guide them towards it. So bearing this mind there’s always a surprising measure of individuality and innovation .. I’m just not sure that I want to see another Incredible Hulk, Elephant Man or Dobby the House Elf. I feel that no matter what skill or sensitivity is shown it’s getting hard to remain inspired by them.

Skilled makers don’t necessarily have to be innovators, or have great or original ideas, but in New Blades 2015 as in previous years there was no shortage of ‘special’!

Above another piece from Thomas Hughes this year and below from ‘S.B’ 2013 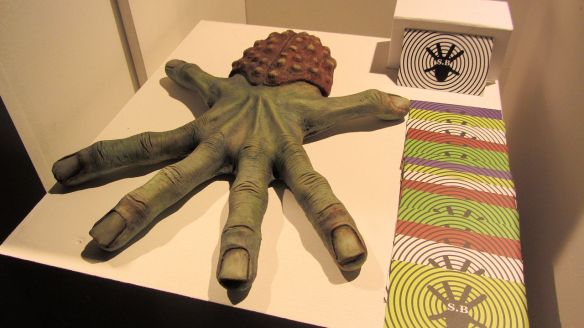 Below another piece this year from Imogen Nagle, ‘Herman the merman’

The show also offers the unique opportunity to learn something about the making processes. As one comes to expect from design/practical Degree shows there are many portfolios to browse through which include detailed records of the designing and making process. What distinguishes New Blades in this respect compared to other Degree shows I visit is that many of the students really do take this aspect of ‘record keeping’ seriously .. as an integral part of their work. Often the work-in-progress photos are not merely snapshots, but carefully balanced and crafted works in themselves! I think this reflects the increasing importance of Internet presence, but also perhaps the increasing popularity of ‘making ofs’ as part of the entertainment. 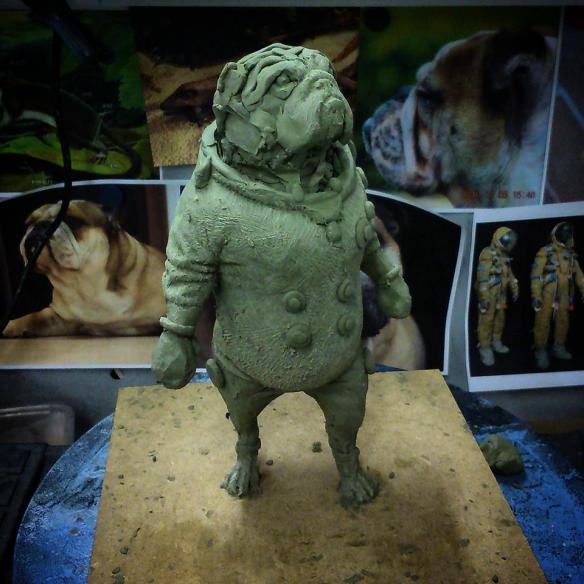 But I feel one of the most important inspirations from this exhibition within the current climate is that much of the best work emphasizes the value of ‘fusion’ .. the discerning use of digital help and the perfect fusion of traditional hand-work and machine-enabled. Faced nowadays with a greatly expanded toolbox, ‘model-makers’ have to become expert ‘choosers’. 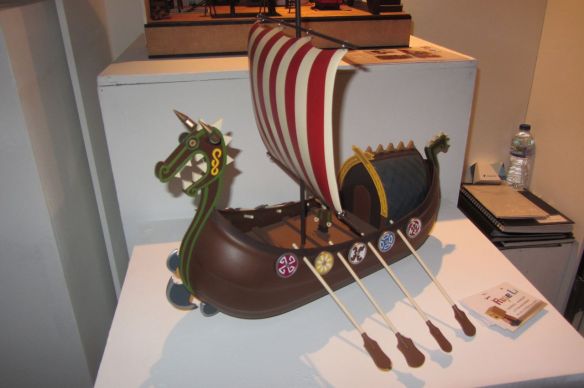 Also from this year above Rujie Li and below Jack White

It may be wrong to take perfection or absolute realism as benchmarks for judging the physical work .. one has to accept that if the work is destined for the screen it could undergo further transformation. Considering the fusion of practical and digital methods currently prevailing it may not make economic sense for a physical object to contain every nuance .. it may be quicker, easier and cheaper to add refinements digitally. On the other hand I’m guessing that the students are nevertheless encouraged to put as much as possible into the physical rendition. I was very glad that the exhibition gave the physical objects centre-stage, and that there seemed to be very few monitors or laptops around!

This year’s students haven’t exactly been ‘quick off the mark’ in getting their portfolios online, part of the reason why I’ve used examples from past years as much as from the present to illustrate the range and standards achieved. If you like what you see, you can see more work from this year’s or previous exhibitions at

.. and go to the 4D modelshop website from May onwards next year to see when the next New Blades will take place.

There’s only one single and major fault with this show .. that it’s not on for longer, at least long enough for more of the public at large to appreciate what it offers! It’s always brief, but this year was extremely so. It’s a big ask in London though! It must cost a lot to stage it even for a couple of days and all money made goes towards the costs.

The colleges and courses

If you’re not a film/tv industry insider you may struggle to understand what is meant by ‘visual effects’ as opposed to ‘special effects’ .. and it’s even a little more complicated when it comes to courses! Course options are changing in accordance with constantly evolving territories. For example University of Hertfordshire offers three ‘Model Design’ BA choices .. ‘Character and Creative Effects’, ‘Model Effects’ and ‘Special Effects’. Arts University Bournemouth offers one comprehensive BA in ‘Modelmaking’. University of Bolton runs a BDes in ‘Special Effects for Film & TV’. University for the Creative Arts entitles their BA ‘Creative Arts for Theatre and Film’ and City of Glasgow College offers an HND in ‘3D Design: Model Making for the Creative Industries’.