For those of you interested in what I do with stencil card as I’ve described in my article Working with stencil card under ‘constructing’ in the Materials section, I have to warn you that there’s an inferior substitute appearing in some of the UK sources I’ve listed. The proper, traditional material I’ve always relied on is an attractive honey/ochre colour, is 375 microns thick and smells very noticeably of linseed oil. I first noticed the ‘poor’ stuff at 4D modelshop who, I’m assuming, had been forced to accept what started to come from their usual supplier, but now I’ve seen the same change in University of the Arts college shops which suggests that this may become more widespread. The inferior type is a darker, dullish brown, seems a little thicker; and has a very different and far less agreeable smell. More importantly .. it is a little tougher to cut, certainly doesn’t cut as sharply, frays at the edges much more easily, and the method I recommend for ‘graining’ the surface with sandpaper just doesn’t work! The surface merely disintegrates, becoming very ‘wooly’ and loses further definition when stained or painted. This stuff may still offer some advantages over more regular thin white card, for its strength and for basic cutting of delicate forms .. but in other respects and for my purposes it’s pretty useless! 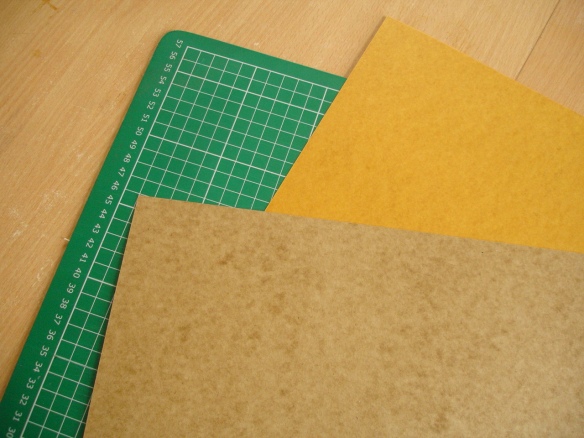 My advice is to speak directly to the supplier if you are buying stencil card online .. check for sure that it is the standard ‘honey’ colour and not the dull brown, and that it is 375 microns thick (because there’s also a thinner 250 micron version sometimes sold in its place). The other day I bought the proper stuff from Flints in London, and I’m fairly sure that A.S.Handover and Wrights of Lymm will still be supplying it. These three also offer by far the best prices!